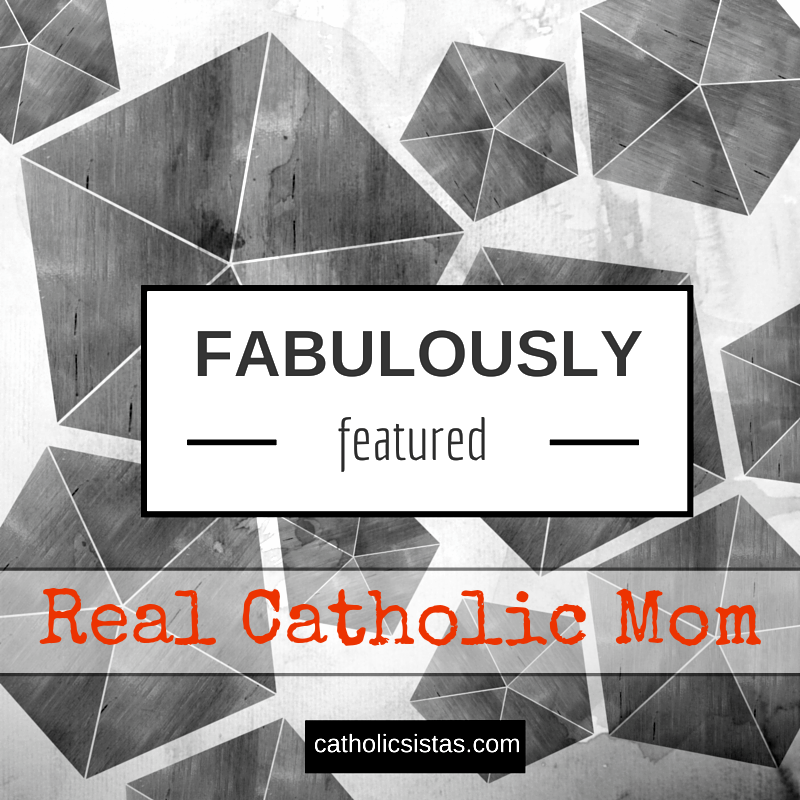 Welcome to Catholic Sistas’ newest series, featuring some of our friends in the Catholic blogging world entitled Fabulously Featured which will run on Wednesdays. I have always wanted to introduce you to some new blogs to follow and support, but seriously lacked the time to put this together before now. In a Facebook group of fellow Catholic women bloggers, I asked ladies to answer some questions for this series, and they were all too excited to participate! I give you their answers in their own words. 🙂

Heather Renshaw from Real Catholic Mom strikes me as someone who would get my humor and then offer me some of hers in return. She has a ton of passion for life and the Faith and it is evident in not just her writing, but her projects. Ah, a gal who is into projects – like writing books, or co-hosting a radio show, or running women’s conferences…SHEW! Dang, girl…I get tired just reading about that and I haven’t even touched on the fam yet! She’s got a whole brood of kiddos that she swears she didn’t eat in one pic on her about page. Anyway, let’s dive into this feature and find out more about what makes Heather tick. I’d love to get to know her better, but I have this crazy feeling our schedules would never align-ha!

Real Catholic Mom is mostly random musings about my journey as a woefully ill-prepared, tragically underpaid, outrageously multi-blessed Catholic wife and mother with some scriptural devotions and encouragement tossed in the mix.

Gosh … why did I start blogging? Honestly, I can’t remember, exactly. I’d always written little stories and poems and essays as a kid, and maybe I just thought it would be nice to get some of what was in my head and heart somewhere “out there” instead of clogging up my cranium (because Lord knows I need all the brain space I can get). Anyway, I realize I am a really painfully inconsistent blogger. Writing usually takes a back seat to most other things in life. So, when I *am* motivated to write, it is usually because a bunch of things have lined up: I got a really good night’s sleep, and I feel the Holy Spirit has given me something to say in particular, and I *really* need to just get something off my chest, and I’m feeling particularly brave enough to push “post” … orrrrr … I have a Blessed is She (www.blessedisshe.net) deadline. LOL.

Hm. I suppose my favoritest is having a regular place to park my thoughts, and the subsequent sense of community I feel when what I’ve written resonates with or encourages a reader. I think of dear C. S. Lewis’s quote: “Friendship is born at that moment when one person says to another: ‘What! You too? I thought I was the only one.'” There’s been so many instances like that since I began blogging because of something I’ve written (yet more often because of something I’ve read); it’s truly refreshing and empowering, and that sense of recognition of light in the other and acting upon it is what I like to think building the Kingdom of God on earth is about.

So, these posts are all sort of snapshots into my crazy life, but with a humorous spin. I don’t know if they’d be a reader’s favorite, but I like ’em.

Ha, ha! I am really interested to see how the other writers respond to this question, since I’m still not exactly sure how to follow my dreams of writing more whilst chasing sweet yet demanding children all day (and sometimes night) long. I believe the ladies who consistently blog well and maintain strong online community ties yet maintain house and home to satisfaction must have super human powers! I, on the other hand, as I mentioned, don’t write as often as I’d like. When I do write, it really just means that something else is not happening; for example, right now, dishes await me in the sink. Ugh.

Seriously, though, my spiritual life has to come first. At my particular judgement, I doubt God will accept a blog entry in lieu of time I should have spent in prayer. I really try to make that the most important. And next I’ve been taking better care of myself physically in recent months (other than the sleep thing – that is often augmented with too much caffeine) so I can be a better wife and mother. And 2015 is supposed to be the year of being more intentional with quality married time. We’re a few months in. Going well so far. And the children will always need me. I’ve become accustomed to that. But my husband and I also recognize that I need time away to rejuvenate and recreate and do things I’m passionate about just like anyone else, so balancing is getting a bit (dare I say) better with his encouragement and support. Still tough. But better. Check back with me in a few months. 🙂

I really write for other Catholic moms in the trenches of life, because that’s who I am and that’s what I know, but honestly, I would be happy for anyone to read my blog and leave with a little more joy than before they began.

My tagline is “keepin’ it real in a broken + beautiful world,” because while I definitely don’t expect or encourage anyone to read my blog as a “how to” regarding “real” Catholic motherhood/womanhood, I do hope that some of what I write encourages my readers to continue fighting the good fight of faith – to keep running the race – and to be true to themselves in the process. I try to be as authentic – as real – about the joys and sorrows in my own life as I can, with an eye toward redemption and healing. I figure if God can save a wretch like me, surely there’s hope for everyone else!

Obviously one’s season and circumstances in life will impact her ability to write frequently, but gosh, I would encourage someone that, if there’s a tug on her heart to write something, she should try it out and see where it leads! My experience is that there is really never going to be an ideal time to do pretty much anything, but if God wills it and you unite your efforts with His will, the two of you can make it happen.

Would you {or someone you know} like to be fabulously featured?

Send an email to Martina@CatholicSistas.comand reference the Fabulously Featured series and we’ll get the ball rolling to get you or your friend featured!