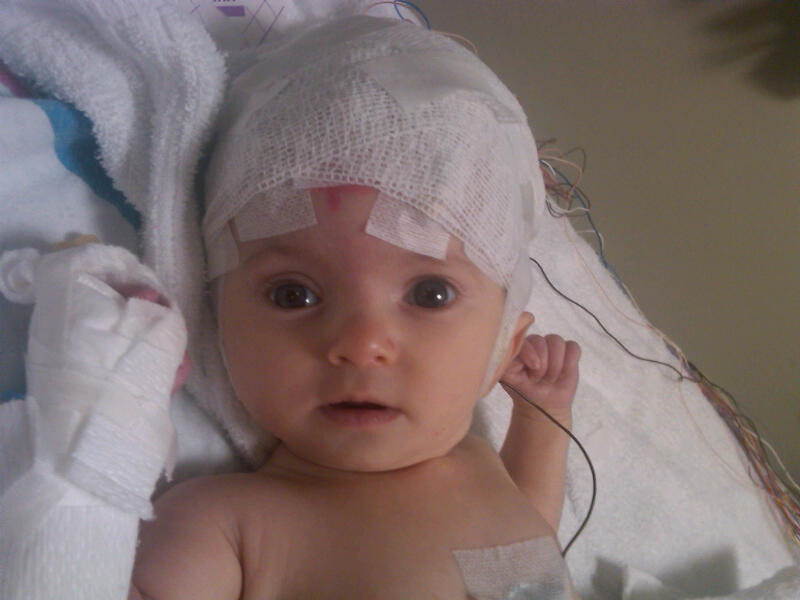 Not much can surprise me these days.  Being the mother of 5 children, I’ve kind of “seen it all” …. And with the baby of my 5 girls having special needs, I have experienced all kinds of worry, fear, and discovery about society’s attitude towards children that are different.  Some of these discoveries have been bad (being advised to terminate the pregnancy) and some of them have been good (Meagan, so far, defying anything doctors predicted for her).  But I must say, I read an article the other night that stopped me in my tracks.  It literally took my breath away for a second – and even pushed me to ask myself “Is this real?”

The article detailed a couple seeking treatment for their young daughter, who has a condition that prompts developmental delays, and physical malformations and organ failures alike.  The time had come where her kidneys looked like they were going to fail in the next year, so they were speaking to the Children’s hospital about a kidney transplant for their daughter.  Long story short, the doctors told the mother that her daughter would not be getting a kidney transplant….because of her mental disabilities.  As I can imagine, the mother was completely taken aback…and asked again.  The doctors repeated what they had said, and even told her if it went to an ethics board, it was still up to them and they still would not do the surgery.  Because on her sheet, highlighted, was the phrase “mentally retarded.”  The family left, devastated, and wondering where to go from there.  Who do you seek help from when your child has been denied care…not because there is no hope… but because doctors judge your daughter as ‘unworthy?’

This article and the whole situation really hit home for me.  How can the medical field decide who is worthy of treatment and who is not? How can they tell a family they won’t save their daughter – even when it is clearly stated it is what the family desires – and pass judgement on the quality of that child’s life?  At one point in the article, the doctor even told the mother “This is hard for me.”  Hard for who? For HIM?  If he did not want to truly persist in attempting to prolong life for his patients, he should not have become a doctor.  It isn’t up to him to treat the girl or not based on what he feels is a ‘bad’ quality of life!  How does he think this is for the girl’s family? Does he think this is hard for them? How selfish of the doctors to not only deny treatment based on a mental developmental delay, but then to also ACT like this decision is ‘hard for them.’

In my personal opinion, I believe this type of “treatment by judgement” is an absolute follow up to pregnancy termination.  What is our society to do when women are not talked in to terminating for medical reasons?  What is our society to do when these mothers SELFISHLY choose to bring these sick or disabled children in to the world?  Well, denying treatment based on the child’s mental disability sure seems like a great place to start.

We have all heard of the phrase “Plan B” …. It implies a back up plan to an original plan that we set out to accomplish, yet did not complete for one reason or another.  So we turn to “plan B.”  This case, and the multitude of cases I’m sure it represents are all a “Plan B.”  This approach allows the medical community, once again, to “terminate for medical reasons.”  How is this done? This time the child is here.  The child is visibly alive… the doctors can’t now kill the child…that would be murder.  So instead, we have this cunning way of disguising such a mission – and doctors, such as the ones in this article, can deny parents life saving treatment of their child based on that child’s quality (or lack there of in the doctors’ eyes) of life or mental state.  This sly approach allows society to still rid itself of those “have nots” that “misguided” mothers still brought into the world despite the “ethical” avenue of termination that was available. Disabled children escaped abortion in the womb, but only to be denied medical assistance in the outside world.

What is going on with our society? What is going on in this world that situations like this happen, probably more than we know, and it has not made the headline news, is not in major news articles, or is not sensationalized like other appalling cases like the Casey Anthony murder?  There is only one answer: the logical extention of the abortion mentality has begun.  We have started to accept “ethical” ways to let living, breathing children die because we could not kill them in the womb.  We have opened a Pandora’s box that will only lead to more intentional neglect in our medical communities.  We are on an extremely slippery slope with this mentality.  What one doctor deems an unworthy life, another may see as worthy.  When one doctor sees a mentally retarded child as a sad mental state, another may see the child as doing more than they were ever expected to do.  A doctor has no authority to use a child’s disability or mental state as a baseline for denying treatment. 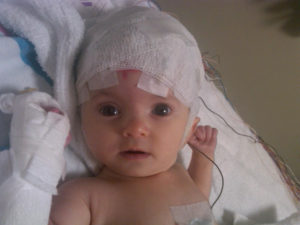 Let’s take a personal case – my youngest daughter.  She was born with severe congenital Hydrocephalus (fluid in the brain).  She had a shunt surgically placed on her 3rd day of life to start to drain this fluid and hopefully let her brain grow back out.  Children with severe congenital Hydrocephalus have a wide variety of outcomes – some end up recovering fairly well and leading “normal” lives as long as the shunt keeps working and the brain damage was not significant….and some end up with severe needs, even with a working shunt, because the brain was damaged so much by the fluid pressure, it cannot recover fully.  We have no idea where on this spectrum Meagan will end up, as she is only 4 months old.  She eats, sleeps and smiles….but she also has seizures, and a brain bleed, and a cyst.   So let’s assume for a moment that Meagan does end up with mental delays and severe developmental delays.  Although she is mentally not equal to her peers,  let’s assume she does well for herself.  She is happy.  She smiles, laughs, and communicates.  She is living a full life.  Let’s pretend at age 12 her shunt malfunctions and she needs emergency brain surgery to put in a new shunt – will the doctors deny her a new shunt because on paper she is mentally delayed?  Will they decide to “ethically” let the fluid build back up in her brain, causing enormous pressure and unbearable pain, and eventually let it kill her because she is mentally behind, and doesn’t deserve a new shunt?  What if Meagan turns out completely mentally ok, but her shunt breaks at age 12.  Will doctors deny her a new shunt because they think a life dependent on a device isn’t worth it? Because it could break several more times and put her through countless brain surgeries. …which is an awful existence…so would they choose to ethically let her die? The logical extension of their medical choices could very well mean one of the above outcomes for Meagan if her shunt were to fail.  Even if she were to end up a fairly normal child – if we have denied medical treatment to other children based on mental disabilities, why not keep extending the logic and deny medical treatment to kids dependent on devices? Kids who have to be on medicines their entire lives? Kids who live with pain everyday?  And why stop here?  Let’s start to evaluate ALL children’s lives.  The ones with mental and physical disabilities are already goners…so let’s not move on to children in abusive situations.  Kids who struggle in school.  Kids who are bullied.  Kids who don’t have a good family life.   Isn’t taking a child out of a less than desirable situation by ethically killing them just as honorable as letting a mentally disabled child die who also has a “low quality” of life? Should we start asking children about their home life, how they feel about school and what potential they have in life as qualifying questions on medical questionaires that will (or will not) grant medical care they need? These last examples sound SILLY! This would be murder outright… or would it be?  This is exactly where we are heading if we don’t get our heads out of the sand and start to vehemently fight back against this nonchalant attitude about life. Isn’t it more ethical to start denying these groups of children care as well, and let them die?  Of course it isn’t…..but this is the path we are headed for if we let doctors get away with basing treatments on their personal views of a child’s life quality. 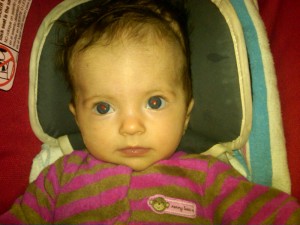 Mothers, like myself, who denied ‘termination for medical reasons’ … Be on guard.  We may have denied the evil of abortion and helped our children escape the grips of death…but it could come at a later time. We may need a treatment for our child that is lifesaving…but be denied because our child is not “perfect” or is mentally delayed.  We may be told to our faces, as the mother in the article was, by a person who spent 3, 7, or 10 years in a medical school that they hold the authority to judge our child’s quality of life as a basis for treating that child. On what authority, exactly, do they have that right?

I am so tired of hearing stories like this mother’s struggle to get her daughter a kidney transplant.  I am so tired of listening to the whining of the medical community about what is or isn’t ethical for OUR children.  I am so tired of being part of a world that focuses so much on dying.  Have we forgotten the core of our being here on Earth? We aren’t here waiting to die… we are here waiting to LIVE.  God did not give us His only Son to die on the cross so we could live in this gloom.  God gave us His Son so we could LIVE.  When is our society and our medical field going to start LIVING instead of helping us die?  When are they going to see the VALUE in every life from conception to natural death, instead of persuading us that we need to find “ethical” ways to “let” unworthy people die?  My friends, this is a dangerous slope we are on.  But we shouldn’t be surprised.  With abortion rampant, and without true protection and value of life from conception, we have opened the doors for doctors to do what they are doing to the mother of this little girl …. We have opened the doors for doctors to ASSIGN value to life at any given point they see fit.  And with this new ‘privilege’ bestowed upon them, none of us are safe.

**You can read another entry by Molly about her daughter Meagan from Catholic Sistas and follow her online journey of Meagan’s story at Priceless Little Pearl. You can also read more about Amelia’s story from fellow contributor Stacy Trasancos’ blog entry at Accepting Abundance: When Life is Alienable**

12 Replies to “Eugenics in disguise”