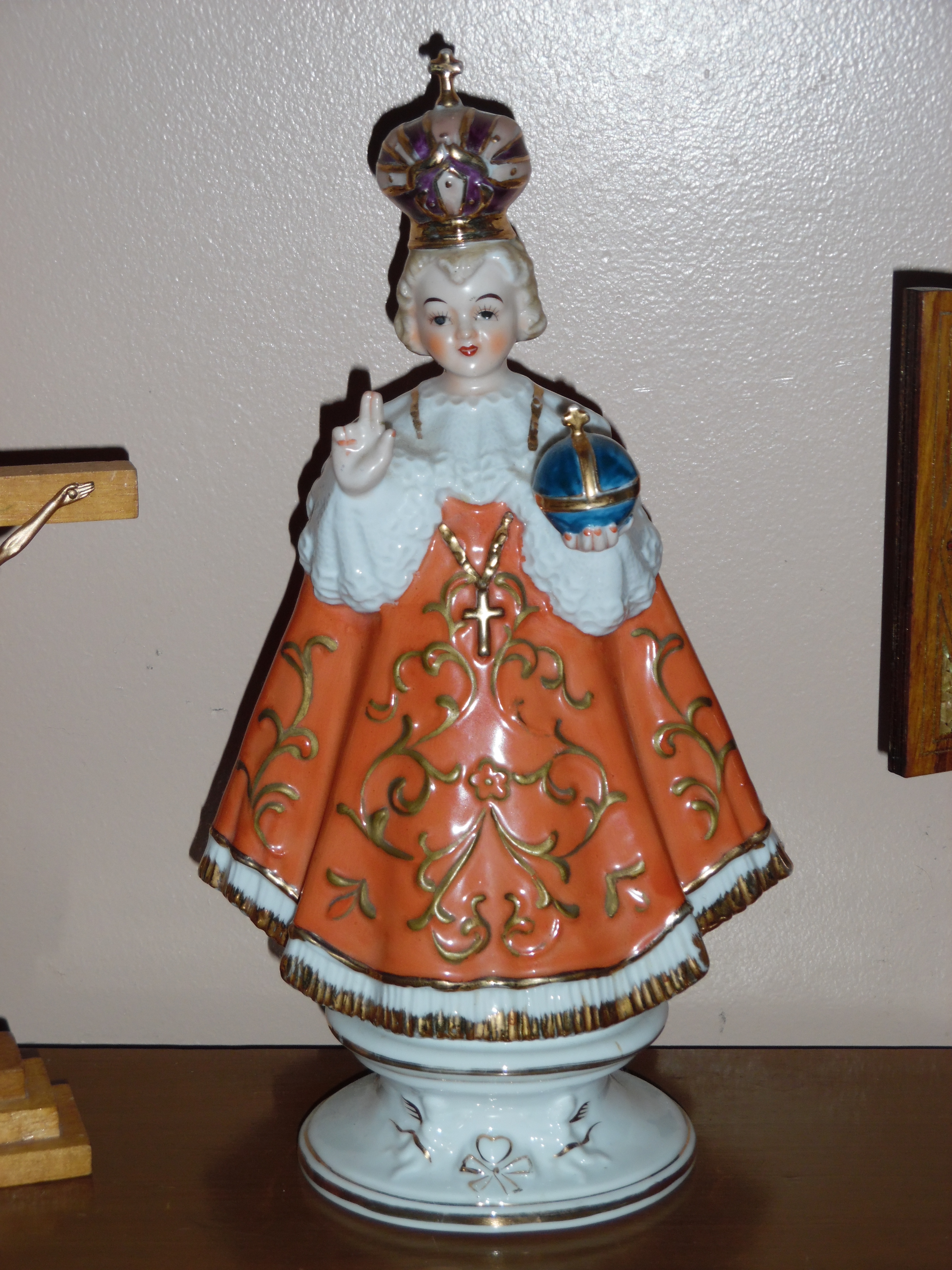 “Dear 8 pound 6 ounce newborn infant Jesus, don’t even know a word yet, just a little infant and so cuddly but still omnipotent, thank You for all Your power and Your grace, dear Baby God. Amen.”

This line from Talladega Nights is one of my favorites. The setting is crude and the reason the family prays is maybe not the best (they are praying to win and to have more money), but it does highlight an aspect of faith that many often don’t consider. When we pray, we don’t necessarily have to pray to the Jesus we all envision when someone talks about our Lord. Jesus was Lord and Savior as a man, as a teen, and as a sweet infant as well. 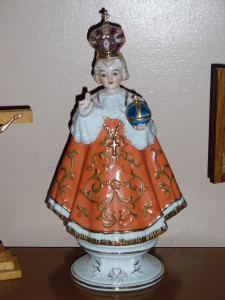 Perhaps you’ve not heard of the Infant Jesus of Prague. A statue of the infant Jesus dressed like a king was brought to Prague by Maria Manriquez. While not the first statue of the Infant Jesus, it is definitely one of the most well-known. It was said that the Infant Christ had appeared to a friar and revealed the statue to him. The beautiful wax statue is 18 inches tall and shows the infant wrapped in kingly clothes. In His left hand he holds a globe with a cross atop it. This shows He has kingship over the world. His right hand extends a blessing to us with His first two fingers raised to show His dual nature- truly human and truly divine.

The statue was eventually dedicated to a Carmelite monastery where the friars and many others began to have a deep devotion to the Infant Jesus. However, as The Thirty Years War raged and the Saxon army invaded Prague many times, the friars fled the monastery in 1628. They hid the statue behind the altar. Years later when they returned, they forgot about the statue. In 1638 it was rediscovered but the hands were missing.  Father Cyril, the friar who found the statue, was said to been visited by the Infant Jesus who told him, “Have pity on Me, and I will have pity on you. Give Me My hands, and I will give you peace. The more you honor Me, the more I will bless you.”

Father Cyril, as all the friars at the monastery, had no money to fix the statue. They also did not possess the skills necessary to fix such a work of art. He asked for the Blessed Mother’s intercession, pleading to have the funds become available to help him fix the statue. It is said that he received another vision from the Infant Jesus who told him, “Place Me near the entrance of the sacristy and you will receive aid”. He did as he was told and within a few days a man came by and fixed the statue. Shortly thereafter miracles began happening. An altar, and finally a chapel, was built to house the Infant Jesus. Despite unrest and war, miraculously the chapel and the statue have always remained unscathed. To this day pilgrims from around the world come to venerate and pay their respect to the Infant Jesus.

Devotion to the Infant Jesus may seem strange to some when the bible only speaks of Christ’s work as an adult. Sometimes it’s easier for us to connect to the man who was Jesus Christ; after all we are often faced with the same temptations and struggles that He faced. But Christ came to us as an infant. He came as a helpless newborn that had to rely on His mother and earthly father to provide for His needs. He came unable to talk and unable to walk. He came vulnerable to the world. He came as we still come. It is not only ok but it is also good to pray to Christ at the various ages and stages of His life, including as an infant. He was both human and divine from the moment of His conception. His entire life, from conception to death, was holy and is worthy of worship and adoration. 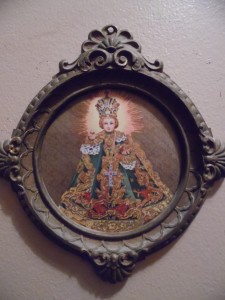 I have a particular devotion to the Infant Jesus. I have a statue of him as well as pictures in my home and I carry a devotional card and medal in my purse at all times. I find His vulnerability as an infant to match the way my heart often feels. I feel helpless to take care of my needs on my own, unable to speak the right words when necessary, and unable to walk the right path without guidance. He understands that helplessness. He knows that I rely on Him to take care of me just as He relied on Mary and Joseph to take care of Him.  When I pray to the Infant Jesus I feel an overwhelming sense of peace. I know that even as a baby He is able to guide and protect me.  I turn to Him for many things but I find it especially comforting to ask Him to watch over my children, especially my babies.

If you haven’t discovered The Infant Jesus of Prague I encourage you to learn about Him. The miracles that flow from Him are tremendous and the peace that comes from entrusting yourself to His care is overwhelming.