Catholicism 101: Creation and the Angels

Creation and the Angels
God is the Creator of heaven and earth because He made all things from nothing.  The

chief creatures of God are angels and humans.  Angels are created spirits, without bodies, having understanding and free will.  God created the angels to see, love, and adore (give honor to) Him in heaven.  They are spirits, and therefore have no bodies.  But they have understanding and free will like we do.  Besides that, God also gave them great wisdom (love and skill in the things of God), power and holiness (a sharing in God’s own life).

Before letting the angels join Him in heaven God wanted to see if they would obey Him.  All the angels were put on trial by God, as we are now bring tried so that we may gain heaven.  Not all the angels remained faithful to God; some of them sinned (disobeyed God).  These are the bad angels, or devils in hell, who tempt (attract us to sin) us.  The first angel to sin against God was an angel by the name of Lucifer whose name means “the carrier of light.”  He was proud of the power God had given him and wanted to be greater than God, and he actually said he would not serve God.  In Revelations 12: 7-9 we find what happens next:

“And there was a battle in heaven; Michael and his angels battled with the dragon, and the dragon fought and his angels.  And they did not prevail, neither was their place found any more in heaven.  And that great dragon was cast down, the ancient serpent, he who is called the devil and Satan, who leads astray the whole world; and he was cast down to the earth and with him his angels were cast down.”

Saint Michael, the Archangel, whose name means “who is like God” arose to fight for God.  The good angels joined him and they cast into hell Lucifer and the other bad angels that followed him.  Lucifer is also referred to as Satan and the bad angels are devils.

The good angels serve God in heaven and on earth.  The good angels help us by praying for us, by acting as messengers from God to us, and by serving us.  God gives to each one of us a guardian angel to pray for us, to inspire (suggest good acts in us), to keep us from harm, and to help us against temptations (attractions to sin).  Some of our temptations come from bad angels; other temptations come from ourselves and from the persons and things around us.  We can always resist temptations, because no temptation can force us into sin, but sometimes we can’t do it alone.  Some temptations have deeply rooted themselves into our souls and hold us ransom.  God will always help us to resist temptation if we ask Him.

Since angels are bodiless creatures, it is impossible for them to have bodily wings like, lets say on a bird.  On different occasions  God has given special bodies to angels who were His messengers, so that men could see them.  There are many times in history when angels have been sent by God to give us important messages. Here is a list of some of the times we know of when angels have taken bodies to send messages to us from God:

In his vision of heaven, Saint John the Apostle saw many angels and men clothed in white robes with palms in their hands.  They cried out “worthy is the Lamb that was slain to receive power and riches  wisdom and strength, honor and glory and praise!” (Revelations 5:12). All the angels bowed before the throne and adored God, saying “to the One seated on the throne, and to the Lamb, be praise and honor, glory and might, forever!” (Revelation 5:13).  We will see God’s holy angels when they come with Jesus at the Last Judgement.  He said, “When the Son of Man shall come in His majesty, and all the angels with Him, He will sit on the throne of His glory; and before Him will be gathered all the nations.  The King will say to those on His right hand, ‘Come, you have My Father’s blessing.’  To those on His left He will say, ‘Out of My sight, you condemned into everlasting fire prepared for the devil.”  (Matthew 25: 31-46)

In 1996, Hollywood came out with a movie entitled Michael starring John Travolta.  In this movie others come to learn that he is Saint Michael the Archangel and not just a mere human.  Hollywood/cartoons have been painting a picture in our minds of what angels are or might look or act like.  Although angels and humans are both created creatures it is erroneous to believe that one can become the other.  In other words, when God gives angels temporary bodies to deliver messages they do not become human.  In the same form, humans cannot become an angel.  You can however, think someone is an angel.  But then the word angel goes from a noun to an adjective (a description). 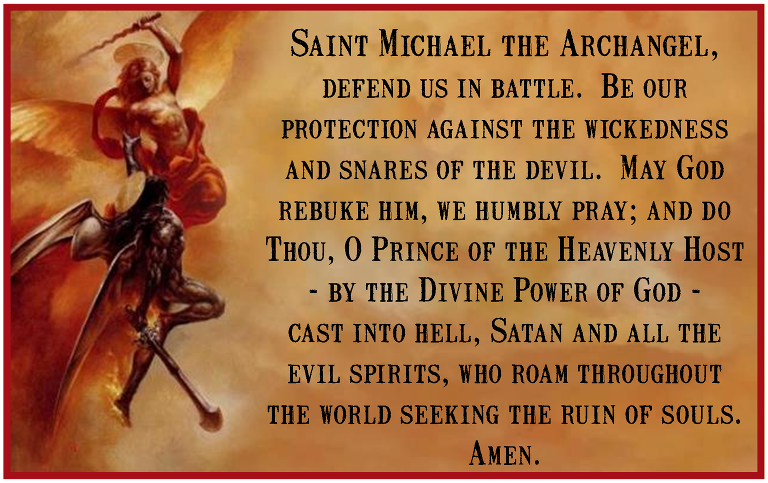 Two of the most popular Catholic prayers regarding angels are the prayer to our Guardian Angels and the prayer to Saint Michael the Archangel.  Saint Michael is the leader of the heavenly armies of angels.  He is the mighty protector of the Church against all her enemies and the one that cast Satan to hell.   On Sunday April 24th 1994, Pope John Paul II recommended this prayer be used by all Catholics as a prayer for the Church when he said:  ‘”May prayer strengthen us for the spiritual battle we are told about in the Letter to the Ephesians: ‘Draw strength from the Lord and from His mighty power’ (Ephesians 6:10).  The Book of Revelation refers to this same battle, recalling before our eyes the image of St. Michael the Archangel (Revelation 12:7). Pope Leo XIII certainly had a very vivid recollection of this scene when, at the end of the last century, he introduced a special prayer to St. Michael throughout the Church. Although this prayer is no longer recited at the end of Mass, I ask everyone not to forget it and to recite it to obtain help in the battle against forces of darkness and against the spirit of this world.”‘  Pope Leo XIII wrote this prayer after hearing a conversation between Jesus and Satan:

“Saint Michael the Archangel, defend us in battle.
Be our protection against the wickedness and snares of the devil.  May God rebuke him, we humbly pray;
and do Thou, O Prince of the Heavenly Host – by the Divine Power of God – cast into hell, Satan and all the evil spirits, who roam throughout the world seeking the ruin of souls.  Amen.”

This is actually the condensed version of the original prayer the Pope wrote, up until the early 60’s it was said after every Mass around the world.  Some Bishops are bringing back this beautiful custom, but if yours hasn’t, I invite you to do so on your own. 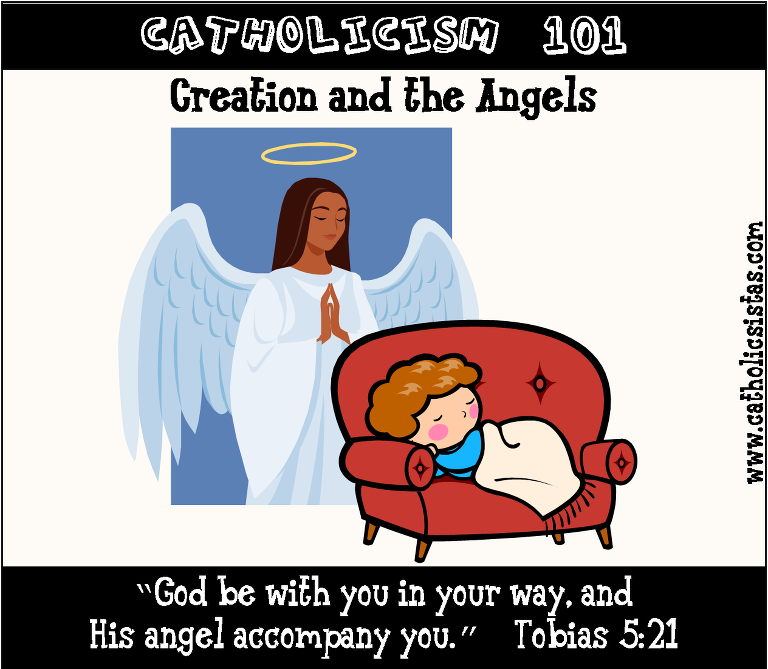 The second most popular prayer is that to our guardian angel:

“Angel of God, my guardian dear,
Through whom God’s love protects me here;
Ever this day be at my side,
To rule and guide.  Amen.”

This is one of the first prayers I learned as a child.  God has given each of us an angel to be our faithful friend and to help us while we are on earth.  This angel is God’s messenger to tell us what God wants us to do and to keep our soul from sin and our body from harm.  Parents, your children’s guardian angel should be your best ally, pray for them to protect your children when they are not with you or as they sleep. 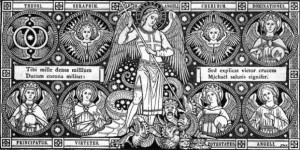 If you are interested in further reading on Angels, the saint to turn to is Saint Thomas Aquinas, known as the Angelic Doctor.  In the Summa he dedicates a whole chapter on Angels.  In this Chapter of the Summa, he goes into detail on the good as well as the fallen angels.  I think it’s good to learn about the angels, the good ones for help and the bad ones to learn how they function to help us avoid sins.  Saint Thomas also covers the hierarchy among them, they are: Seraphim, Cherubim, Thrones, Dominations, Virtues, Powers, Principalities, Archangels, Angels.  I hadn’t realized this until I read the Summa: Archangels and Guardian Angels are the among the two lowest levels in their hierarchy.  One section that is important is entitled, “THE ACTION OF ANGELS ON MEN”  where Saint Thomas writes the following:

1. Since angels are superior to man, they can enlighten man. They can strengthen the understanding of human beings and make men aware, in some sensible manner, of the truths to be imparted. Thus angels can act upon the human intellect.

2. But angels cannot act directly upon the human will; God alone can do this.

4. Equally, an angel can work upon the human senses, ether outwardly, as, for example, by assuming some visible form, or inwardly, by disturbing the sense-functions themselves, as, for example, making a man see what is not really there.

While the media has formed many people’s idea of what angels are, in fact, the Church gives us an accurate description that is very different from the Hollywood portrayal of these Heavenly bodies.  Thankfully we know that angels are part of God’s Heavenly army ready to help defend us in battle, pray for our needs, help keep us safe, and help keep us focused on God and the ultimate reward of Heaven.  While humans and angels are very different we share a common goal of glorifying God through our creation.  We should be always thankful for God’s gift of His angels who surround us and await us in Heaven with God.

➡  Read our other Catholicism 101 articles here:

The Unity and Trinity of God

The Purpose of Man’s Existence