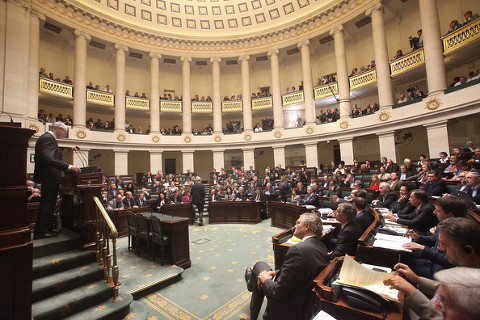 Belgium’s Parliament.
“The greatest evil is not now done in those sordid ‘dens of crime’ that Dickens loved to paint. It is not done even in concentration camps and labour camps. In those we see its final result. But it is conceived and ordered (moved, seconded, carried, and minuted) in clean, carpeted, warmed and well-lighted offices, by quiet men with white collars and cut fingernails and smooth-shaven cheeks who do not need to raise their voices.”
-C. S. Lewis, The Screwtape Letters

For decades, prochoice advocates have insisted there’s no “slippery slope” to abortion, that the right to end your child’s life in the womb will never lead to your right to end it outside of the womb.

Last week, Belgium legalized the euthanization of children. The country’s leaders passed the law despite overwhelming evidence that adult euthanasia (allowed since 2002) is widely abused, with multiple studies proving that a full third of people euthanized in Belgium don’t even request to died. The real numbers are surely even more frightening, as it’s estimated more than half of the nation’s euthanasia deaths aren’t even reported to the government. And while the adult law specifies only physicians can euthanize, a considerable number of nurses have even taken the initiative to end a patient’s life, one study showed. The country has allowed the euthanization of disabled infants for (Personally, I’d be terrified for one of my loved ones to get seriously ill in Belgium.)

The new law allowing children to be euthanized is especially grotesque. Not only may parents request their child be euthanized, but children themselves may request to be killed if the parents consent. Doctors can even override the parents if the doctor believes the child fully understands the choice he’s making.

One has to wonder how anyone could believe that a child–a child!–can possibly understand “the full implications” of having someone put them to death. This is staggering.

Belgian leaders, as well as the country’s press, seem baffled by the international backlash over its new law. Supporters of the new law insist that those who oppose it simply don’t understand the complexities involved. “I’m annoyed at hearing ‘you’ll kill children’ in the foreign media,” Bart Sturtewagen, chief editor of one of the country’s largest newspapers told Reuters. “We don’t use that kind of language anymore. It’s a very different debate on a different level.” Sturtewagen’s comments remind me of abortion advocates’ attempts to dehumanize the unborn child by calling him the “fetus,” “a product of conception,” or “uterine contents.”

Despite the outrage, it would be naive to think that the culture of death openly pursued in Belgium can’t happen here. Legal abortion, as well as reproductive technologies such as in vitro fertilization, have laid the foundation for euthanasia to take root here, too, by making human life a commodity to be disposed of or manufactured at will. Fifty years ago, people would have been aghast at the idea of putting a sick or disabled adult to death, much less a child. But now, we have Princeton professor Peter Singer publicly advocating for the euthanization of disabled children–and he’s raked in bioethics awards for his “brilliant” utilitarian philosophy. Americans now abort 92 percent of their unborn babies diagnosed with Down’s Syndrome, according to Dr. Brian Skotko, a pediatric geneticist at Children’s Hospital, Boston. And with nearly 130 legislative initiatives to legalize physician assisted suicide and euthanasia in just the past 20 years (in 25 states), it’s only a matter of time before the “right to die” now embedded in the laws of Oregon and Washington become the “right to kill” in all 50 states, as it now is in Belgium. 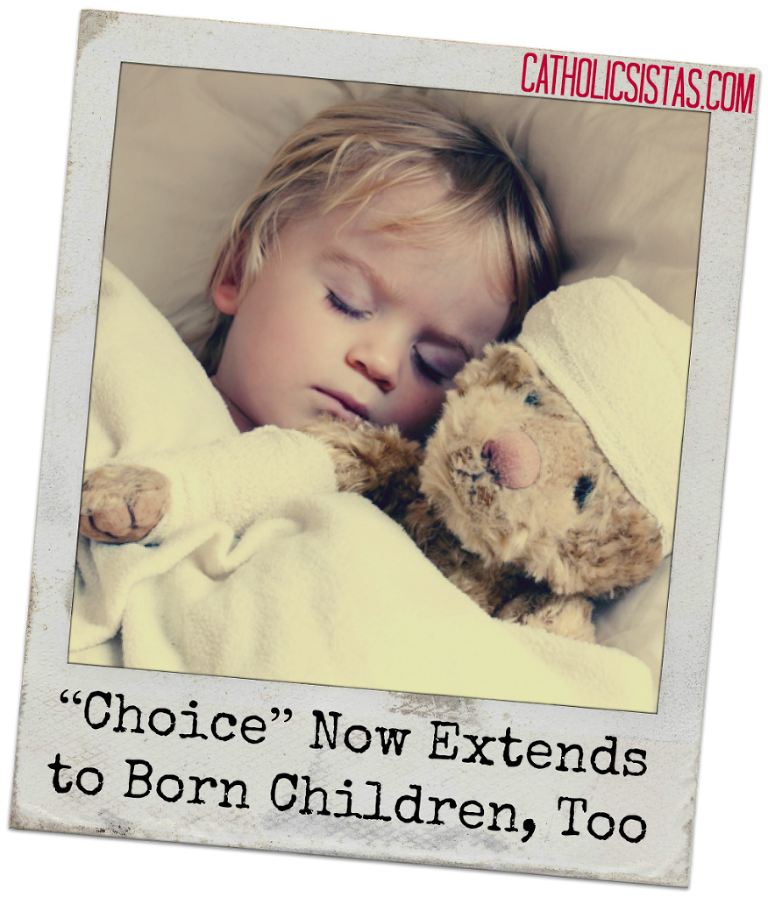 In the Liturgy of Hours, one of the most striking prayers is the psalm that thanks God for allowing us to “serve him without fear.” Most pagan gods, after all, demanded human sacrifice–usually in the form of children. Can there be a more grisly sacrifice than that of having your child murdered to appease a bloodthirsty, vengeful god? When God asked Abraham to sacrifice his son and then had the angel stay his hand before he could kill Isaac, he sent a clear message to his people and to us: “I am a God of life, not death.” To that dark and death-obsessed world, God’s message of life and love surely explains how his people grew from a small, unknown group of nomads to a splendorous nation visited by kings and queens of other lands, who declared in awe, “Blessed be the Lord, your God.”

Is it possible to combat the coming culture of death in America? Yes, but only with God, for “all things are possible” with Our Lord, no matter how bleak the situation appears. Let us teach our children to revere all human life, not just human life that’s convenient or successful. Let’s teach them–no, show them–that love is the solution to life’s difficulties, not selfishness and death. And above all, we must pray and fast for the hearts of our citizens who don’t yet understand the great dignity of each human person, who support abortion and who will support euthanasia when that battle finds its way to our shores.

Through the bottomless mercy of our God, one born on high will visit us to give light to those who walk in darkness, who live in the shadow death. May Jesus lead our feet in the path of peace as we strive to bring His light to our very broken world, a world where our children are once again being sacrificed to false gods.

« Trust in the Lord: the StagesRemoving Distractions, Seeking God »