Catholicism 101: The Unity and Trinity of God

We bless ourselves daily, “in the name of the Father, the Son, and the Holy Ghost.” 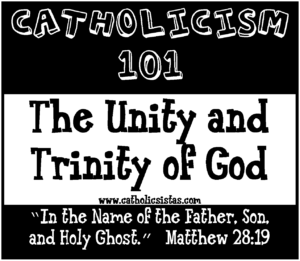 These words came from the twentieth chapter of the Gospel of Matthew, verse nineteen (Matthew 29:19).  This is what is called the Unity and Trinity of God.

The image below (black & white) helps us to get some idea of the Blessed Trinity.  I placed a ring around the triangle in this picture to show that the Trinity, perfectly made, does not have a beginning or an end; just like a ring is a symbol of unity.  {A similar union is found in Holy Matrimony between husband, wife, and God.  Those of you married, every time you look at your wedding ring, think of that!}  God told us that in Himself there are three distinct (really different) Persons; the Father, the Son, and the Holy Ghost.  Each one is God almighty.  This is why we call each of them Divine.  Yet they are not three Gods.  None is older, nor greater than the other.  The three Divine Persons are one and the same God.  To our little minds this truth is a mystery (a truth we cannot fully understand).  There are many natural mysteries about things we can naturally know, such as electricity, radio, and magnetism.  But since God revealed the knowledge of the Blessed Trinity to us, we call it a supernatural mystery.  The three Persons of God are equal to the other as they have the exact same perfections or qualities, as knowledge, goodness and beauty as the other.  They are three in one.

I would like you to think of an apple, one apple has three parts:  the core where the 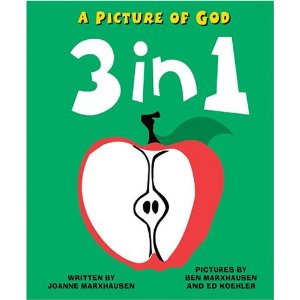 seeds are found, the meat which we eat for nourishment, and the peal which protects the apple’s “meat”.  The core is the God the Spirit, Holy Ghost which plants seeds in our hearts, minds, and souls daily.  The meat is God the Son, Jesus Christ, most especially in the Holy Eucharist who feeds our souls and gives us nourishment.  The peal is God the Father, who protects us and watches over us daily.  (this little analogy can be found in a children’s book about the Holy Trinity called “3 in 1” by author, Joanne Marxhausen.

We cannot talk about the Trinity and end this post without discussing a saint known for his love for the Blessed Trinity, Saint Patrick whose feast we celebrate on the 17th of March (a day when everyone suddenly becomes Irish, even non-Catholics).  Though Scottish by birth (gasp!), the Lord called Patrick to bring the Gospel of Christ to the people of Ireland.  He did this and became a Bishop around the year 433 AD.  Here he explained to the Irish people, particularly the unbelievers, in very simple terms, what the Blessed Trinity was all about by using a shamrock.  Patrick would hold up a shamrock and challenge them by asking, “Is it one leaf or three?” “It is both one leaf and three,” was their reply.   So he would conclude, “and so it is with God!”  One shamrock leaf, with three parts…a simple concept again, three in one.  Here is an excerpt from his book, entitled Confessions regarding the Trinity:

“For there is no other God, nor ever was before, nor shall be hereafter, but God the Father, unbegotten and without beginning, in whom all things began, whose are all things, as we have been taught; and his son Jesus Christ, who manifestly always existed with the Father, before the beginning of time in the spirit with the Father, indescribably begotten before all things, and all things visible and invisible were made by him. He was made man, conquered death and was received into Heaven, to the Father who gave him all power over every name in Heaven and on Earth and in Hell, so that every tongue should confess that Jesus Christ is Lord and God, in whom we believe. And we look to his imminent coming again, the judge of the living and the dead, who will render to each according to his deeds. And he poured out his Holy Spirit on us in abundance, the gift and pledge of immortality, which makes the believers and the obedient into sons of God and co-heirs of Christ who is revealed, and we worship one God in the Trinity of holy name.”

Saint Patrick is one of many examples of Tradition passed down to us about the Truth of the Blessed Trinity.  Now lets turn to Sacred Scripture where we find several passages about this Unity.  Even in the Old Testament we can find a passage where God is referred to as more than one:  In Genesis 1:26, “And God said, Let Us make man in Our image, after Our likeness: and let them have dominion over the fish of the sea, and over the fowl of the air, and over the cattle, and over all the Earth, and over every creeping thing that creepeth upon the Earth.”  Then in Genesis 3:22, “And the LORD God said, Behold, the man is become as one of Us, to know good and evil.”  In Isaiah 48:16 we also find reference to God being spoken of as three in one: “Come ye near unto Me, hear ye this; I have not spoken in secret from The Beginning; from the time that it was, there am I: and now the LORD GOD, and His Spirit, hath sent Me.”

When it comes to the equality of the three Persons, in Sacred Scripture we find more passages.  In reference to God the Father, we turn to Isaiah 63:16, “Doubtless Thou art our Father, though Abraham be ignorant of us, and Israel acknowledge us not: Thou, O LORD, art our Father, our Redeemer; Thy Name is from Everlasting.”  Then in the New Testament in the Gospel of John 6:27, “Labour not for the meat which perisheth, but for that meat which endureth unto Everlasting Life, which the Son of Man shall give unto you: for Him hath God the Father sealed.”   God the Son, Jesus Christ, was referred to in Isaiah 9:6, “For unto us a Child is born, unto us a Son is given: and the government shall be upon His shoulder: and His Name shall be called Wonderful, Counsellor, The Mighty God, The Everlasting Father, The Prince of Peace.”  Then again we find this mention in Jesus’ own words found in the Gospel of John, Chapter 10, verses 27-36, “My sheep hear My Voice, and I know them, and they follow Me: and I give unto them Eternal Life; and they shall never perish, neither shall any man pluck them out of My hand.  My Father, which gave them Me, is greater than all; and no man is able to pluck them out of My Father’s hand.  I and My Father are One.  Then the Jews took up stones again to stone Him.  Jesus answered them, Many good works have I shewed you from My Father; for which of those works do ye stone Me?  The Jews answered Him, saying, For a good work we stone Thee not; but for blasphemy; and because that Thou, being a man, makest Thyself God.  Jesus answered them, Is it not written in your Law, I said, Ye are gods?  If He called them gods, unto whom the Word of God came, and the Scripture cannot be broken; say ye of Him, Whom the Father hath sanctified, and sent into the world, Thou blasphemest; because I said, I am the Son of God?” 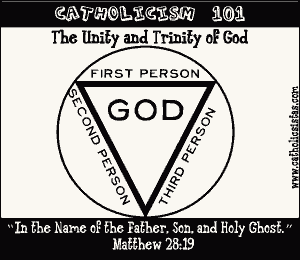 In reference to the Holy Ghost, we also find in Scripture several passages beginning with Genesis 1:2 when the Lord is describing Creation, “And the Earth was without form, and void; and darkness was upon the face of the deep. And the Spirit of God moved upon the face of the waters.”  In the beautiful Psalms, Chapter 139, verses seven through ten, “Whither shall I go from Thy Spirit? or whither shall I flee from Thy presence?  If I ascend up into Heaven, Thou art there: if I make my bed in Hell, behold, Thou art there.  If I take the wings of the morning, and dwell in the uttermost parts of the sea; even there shall Thy hand lead me, and Thy right hand shall hold me.”  In the Acts of the Apostles, Saint Paul tells us in Chapter five, Verses three and four, “But Peter said, Ananias, why hath Satan filled thine heart to lie to the Holy Ghost… thou hast not lied unto men, but unto God.”

Now I know what you are thinking “but what about Pentecost?”   Well it’s simple the Father sent the Son, who sent forth His Spirit, the Holy Ghost, at Pentecost.  For this we turn to John, the Beloved, in his Gospel.  The ever popular John 3:16, “For God so loved the world, that He gave His Only Begotten Son, that whosoever believeth in Him should not perish, but have Everlasting Life.”  Then in Chapter 20, Verse 21, “Then said Jesus to them again, Peace be unto you: as My Father hath sent Me, even so send I you.”  Then we find that God the Son sends His Spirit in the same Gospel of John, “But the Comforter, which is the Holy Ghost, Whom the Father will send in My Name, He shall teach you all things, and bring all things to your remembrance, whatsoever I have said unto you” (14:26).  “But when the Comforter is come, Whom I will send unto you from the Father, even the Spirit of Truth, which proceedeth from the Father, He shall testify of Me” (15:26). “Nevertheless I tell you the Truth; It is expedient for you that I go away: for if I go not away, the Comforter will not come unto you; but if I depart, I will send Him unto you” (16:7).

To the doubting Apostle Thomas, Jesus said that those who do not actually see and fully understand a truth which God teaches are more blessed if they believe in it, than those who believe only after they see and understand it.  It is an act of Faith.  We believe many facts of history because we have the word of good men for them.  BUT it really is much easier for us to firmly believe in the mystery of the Blessed Trinity.  Why so?  Basically because this Truth of our Catholic Faith, the Unity and Trinity of God as the Father, Son, and Holy Ghost, is once again revealed to us in both Sacred Scripture and Tradition.

If you missed the first of this series, Catholicism 101, you can find it here: The Purpose of Man’s Existance

« What our Children can Teach us about FaithSplendid Sundays – October 21, 2012 »