Barack Obama as Lord and Savior

A painting in a college art gallery that depicts President Barack Obama as Jesus Christ.

Actor and musician Jamie Foxx recently made a shocking statement. At the Soul Train Awards Show 2012 he gave thanks to God and then went on to thank “Our Lord and Savior, Barack Obama”. After recovering my ability to breathe, I pondered this statement and came away with an obvious conclusion. Our society is not only going over the Economic Cliff; we have already succumbed to the Moral Cliff. A few generations ago this type of statement would have caused zealous moral outrage. No, I take that back. A few generations ago this statement would not have been made at all – because the citizens of former times would not have thought of a mere mortal in such a way. Right?

Actually history shows otherwise. There have been many emperors and rulers in ancient times who claimed godly characteristics for themselves. In early Egyptian times Pharaoh was seen as a deity by the citizenry and the coins minted during the reign of Roman emperor, Nero, claimed him to be the ‘Savior of the world’.  At the time that the book of Revelation was most likely written, Emperor Domitian was addressed as Dominus et Deus noster, meaning ‘Our Lord and God’. Since only the Triune God is divine and Jesus Christ is the Lord and Savior of the world, such titles are glaringly sacrilegious. Despite such blasphemy, however, the faithful people of God have continued to recognize Him and His sole kingship.

It’s apparent that these sacrilegious trends have been with us throughout history. Just as our first parents lost their bearings in paradise in an effort to attain godly status, we can see that a long line of our forbearers have struggled similarly. Now it appears to be our turn. Somehow our moral compass has been skewed and south is where north used to be. Sure, it hasn’t happened to everyone but the pendulum has definitely swung wildly left. Is it hopeless then? Are we to conclude that that’s just the way of the world and go blindly on our way – all the while shaking our heads at those heathens?

Not for the people of God. The cause of the eclipse of moral reasoning is not lack of opportunity or direction. After all, the Church, in all of her wisdom as well as Holy Scripture, has been a steadfast guide – freely available to us. Catastrophic decisions have been made because temptation accompanies Free Will. We have the option of choosing right or wrong and yet, too often, sinful choices appear more attractive. What we need to realize, then, is that the solution to the problem begins within: within our hearts, within our families, within our churches, and within our communities. Each and every one of us has an important role to play but we can’t begin to become effective until we look to our own failings.

Some things are more important than others 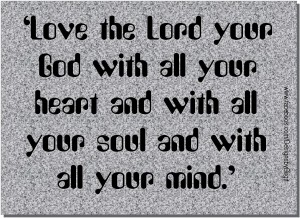 Once we begin to recognize the significance of our priorities, we will begin to be an effective part of the Army of God. Only He reigns supreme and there is no one above Him. No matter how many false gods are thrust upon us by society our faith in the One True God will remain unshaken. When we see a leader give himself godly attributes we will clearly see truth and will live and serve accordingly.  We will see the intrinsic value of others – spouse, children, friends, and humanity as a whole. Only after we have satisfied the greatest commandment will we concern ourselves with self. It’s imperative to have our priorities straight if we are to be successful and worthy people of God.

It takes the entire team

As the Church Militant we are also not here simply to ‘go along to get along’. The part we play in the whole scheme of things is vital – not just for our salvation but the salvation of many. We are blessed to have the Church Triumphant and the Church Suffering as our allies. While they fervently pray and intercede, we are the foot soldiers leading others (and ourselves) onto the righteous path. While we must be aware of these worldly distractions to successfully fight the modern day demons, we should choose our weapons wisely. Without the proper tools – tactical (catechesis), direction (conscience), and strength (sacraments) we will not be able to face the formidable enemy (Satan). 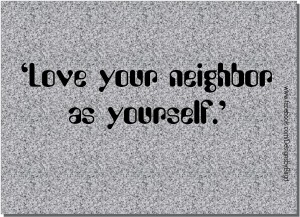 In the end, each of us will be responsible for our own soul. Eternity will depend on what we did to make way for the true Lord – Jesus the Christ. Did we arm ourselves with catechesis, prayer, just acts, charity, and true concern for His Kingdom? Did we sacramentally fortify our souls with Penance and Eucharist? Did we act in charity? Only when we recognize the importance of not just the destination, but also the journey, will we come to know the true joy of eternal life. We are responsible for our own souls but in keeping with Christ’s second greatest commandment we must also love our neighbor as ourselves and to provide guidance by example. Only then will the compass right itself and the path to heaven become apparent.

What is your battle plan? Do you have wisdom to share? We’d love to know your thoughts. After all, we’re all in this together!

VIDEO – Obama absolves Thanksgiving turkey with the Sign of the Cross