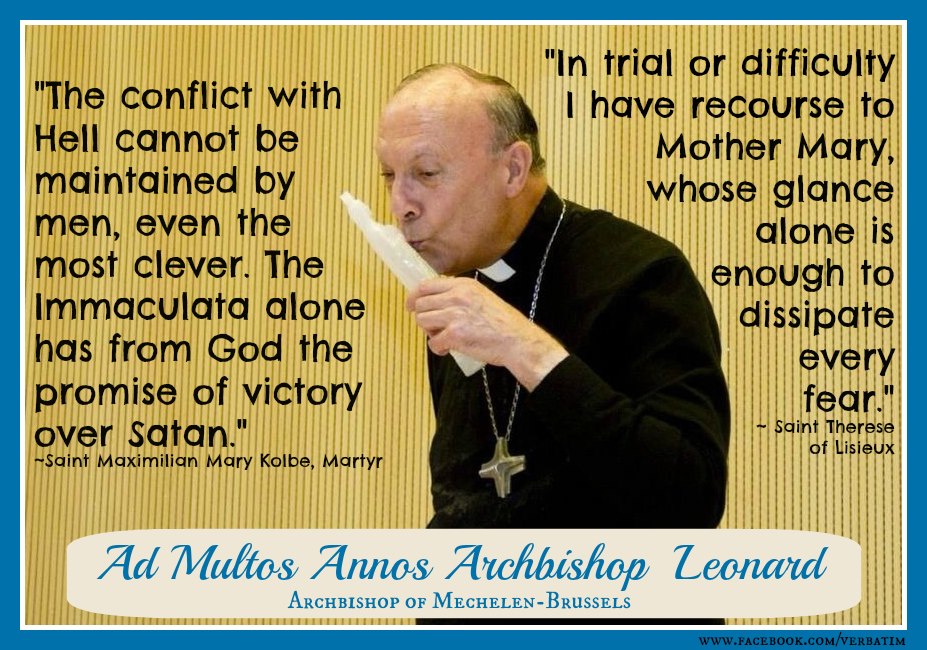 As daughters of Eve, we are ever vulnerable to deception. As daughters of Mary, Queen of the Angels and New Eve, we are charged with a special mission to fight against evil. And the grand irony happens when the father of lies so distorts the sensibilities of women that they confuse good with evil and begin to fight against the Light, calling it darkness, and throwing all their energies against it.

We see this irony happen quite often in pro-abortion circles. Women, the very ones naturally designed to nurture and defend life, are tricked by the deceiver regarding the gift of life and begin to view the incredible blessing of  a baby as a threat to their happiness. When women begin to cooperate with evil, they fall, in some sense farther than men, bringing an energy and emotion to the pro-abortion cause that men don’t have. For men, the issue is clinical.  For women, it can become almost religious, this fight against the “evil” of undesirable pregnancy, and they fight the hardest and the deepest.

This same sad trickery of women is unfolding now, with the atheist feminist group FEMEN. They made international news in Paris last fall, when they hijacked the pro-family/pro-marriage rally, and attacked marchers with water and sprays. If you Google images for Femen, you will get quite an eyeful, as they attack bare-chested and sometimes totally naked. These women act crazed and my heart aches for what pain they must have suffered in their lives to make them so full of anger and violence. They are fighting against the Light on so many fronts, but most visibly against the Catholic Church, traditional marriage, clothing (help, I’m being repressed by clothing!), men, and unborn babies.

FEMEN’s most recent attack was in Belgium last week, where they physically assaulted Archbishop Leonard during an academic debate in which he spoke against same-sex acts. You can read the full story here, so I won’t recount the entire event, but I want to make a few remarks about what happened to Archbishop Leonard. First, he is amazing. I am deeply moved by his holiness, courage, and gentleness in the face of such violence. I love that he venerated the image of the Blessed Virgin on the water bottle that doused him…talk about heaping burning coals on the head of those who persecute you! Thanks be to God that the media gets images like this, that will hopefully give the enemies of the Church pause to consider that maybe Catholics are not all bad. 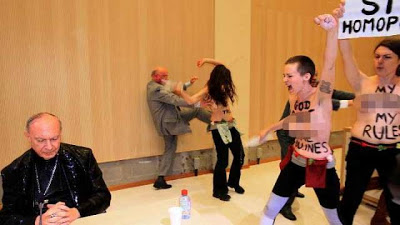 My second thought it is, it might not be long before attacks such as this are common in Europe and even the United States. Militant same-sex advocates are confused and angry, believing the Catholic Church is their enemy numero uno. Archbishop Leonard models for all clergy, as well as all Catholics, the perfect way to respond to violent attacks: prayer and interior repose. His posture reminds me of artistic depictions such as the one below, where early Christians showed great composure while waiting for the lions in the Colosseum. 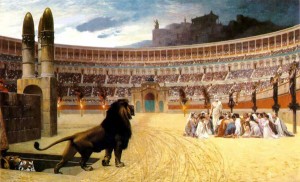 Finally, faithful Catholic women who are trying to live fully our status as daughters of Mary and who strive with Her against evil, need to pray and fast for the members of FEMEN. These women are confused and deeply disturbed, yet God the Father loves each of them dearly. He desires healing and peace for each of these women and so should we. Let’s not demonize our sisters or get angry toward them. That would only succeed in turning us into women with the same kind of darkness in our hearts. We’re called by Jesus to fight evil with love and violence with peace, laying down our lives if necessary for the glory of God and salvation of souls. Mother Mary, terror of demons, pray for us.

2 Replies to “Archbishop Leonard: A Model for All Clergy”