When Mary Comes to Visit

I am prefacing this post to remind all our readers of the Catholic Church’s teaching regarding Marian apparitions.  The Church teaches that no Catholic is bound to believe in any of the Marian apparitions, including those deemed by the Church as “worthy of belief”.  In addition the Church teaches that these private revelations do not belong to the Deposit of Faith nor is their role to improve or complete Christ’s definitive Revelation.  (CCC 66-67)  If you would like further information on Marian Apparitions as well as both public and private revelations I urge you to read here.

The years have quietly slipped away from me but the miraculous events of my pregnancy with Isabella remains deeply ingrained in my heart and mind.  I was 8 weeks pregnant when I took my 4 children and went on a trip to Iowa.  I was going to visit a friend at her house and then travel down to Kansas City, Missouri to visit my in-laws.  It was a long trip traveling from Georgia to Iowa but I felt up to the task.  I loaded our children, kissed my husband, and we headed off on first leg of our journey. Traveling alone with four children and being pregnant with the 5th was no easy task.  But, as we pulled into Billie Jo’s driveway I knew it was worth the effort.  We unloaded and settled in.

I can’t remember how long we had been there, perhaps only a day or two, but one evening I began to bleed.  I woke up Billie and told her I needed to go to the hospital.  She drove me there and after an exam the doctor handed me a plastic container and coldly said, “I can see tissue and I see blood, you are miscarrying.  Try to get us as much of the tissue as you can and bring it back to us.”  He also told me to stay off my feet for a couple days.  He left the room.  I cried.  Billie held my hand and cried with me.  She will never know how much her presence and love helped me.  She drove me back to her house and she tucked me into bed. 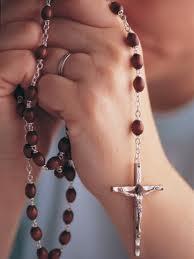 That night, crying alone, I got out my rosary and I began to pray.  I asked God to save my baby.  I pleaded that if He would let her live (and I only became convinced the baby was a girl as I was praying) that I would dedicate her to Him.  She was His and I would raise her for His glory.  In my desperation I asked God to send me a sign that she would be alright.  I asked that He send me one single rose.  I told no one of my prayer.

Several days had passed and I felt up to continuing on to Mike’s parents’ house in Kansas City.  Billie was worried and asked me to stay a little longer.  I assured her I would be ok.  We packed up and headed south to my in-laws.  I told them that I was supposed to stay off my feet because of the bleeding and probability of miscarrying the baby.  They were very helpful in making sure I could rest.  During my stay there I was scheduled to spend some time with my very best friend from high school.  She lived about 120 miles away and said she would drive to see me.  We had scheduled a day to go out to lunch.  She called and I told her what was going on.  She said she would come anyway and we could at least see each other.  My in-laws insisted that we still go out to lunch to have some quiet time to talk. 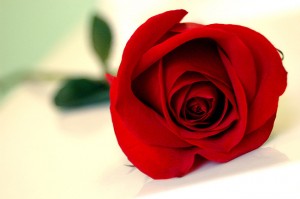 When Elizabeth rang the doorbell I got up to let her in.  As I opened the door I gasped.  I fought to keep the tears from trickling down my cheeks.  There my best friend stood with a single rose.  She said to me, “I know it seems weird for a girl to give a girl a rose but when I just kept hearing someone say, ‘Get her flowers’.  The ones I wanted were all gone but they had single roses.  I almost didn’t get one but something told me to get it.”  My heart skipped a beat and I told her thank you.  As we got in her car I told her that I had something to tell her.  Over lunch I relayed my entire story to her and told her that I had asked for a sign from God… a single rose.   I think she was as surprised as I was.  After lunch we went to her mother and told her what had happened too.  I knew from that moment my baby was going to live.

My pregnancy was rough; the hardest one up to that point.  I was put on bed rest at 27 weeks.  On top of the problems with the pregnancy I was trying to homeschool 4 other children and take care of my husband and our home.  It was a trial for sure.  There were times I didn’t think I would make it through.  Many times I cried in desperation and pleaded with God to please show me He hadn’t abandoned me.  I prayed once again that God give me a sign that all would be ok.  Perhaps I should have just remembered that first rose but I felt like I was losing the battle and I needed to be reminded of God’s faithfulness and love.

That night, after praying, I was lying in my bed.  I had a small light on and I hadn’t gone to sleep but lay there crying.  A very soft light began emanating from the end of my bed.  As I watched I slowly saw Mary standing there, her arms outstretched towards me.  She quietly spoke and said that my baby was going to live and that I was doing what God had asked of me.  I felt a peace wash over me.  She disappeared just as she came.  I would lie there wondering if she had truly been there or had it just been my imagination. 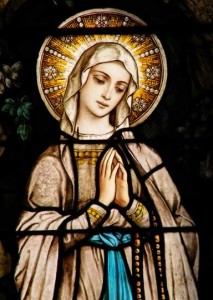 The next day I got a call from Elizabeth.  She said that something strange had happened to her mother the night before and her mother had asked her to call me.   She said that as her mother was driving past Our Lady of Lourdes church (where I used to go to church) the night before that only one of the stained glass windows was lit up.  The rest of the church was dark but Mary stood burning bright in the darkness, her hands outstretched.  Elizabeth’s mother said she felt the overwhelming need to let me know as she felt that she had seen this for my sake.  I was shaking as Elizabeth told me this.  I told her of my experiences the night before as well.  We determined that these events took place at almost the same time.  I knew at that moment that what I had seen was not a hallucination but that Mary had come to me as the sign that God had not abandoned me or our unborn child.

Mary would come to me once more during my pregnancy, this time at my own parish here.  As I was in Mass I was having contractions.  I looked up to see Mary standing on our altar watching me.  I could feel her love.  She smiled and disappeared.  I found that I could make it through the Mass and was reassured that I would make it through the rest of the pregnancy.

As we were looking for names to name our baby girl I wanted a name that meant “consecrated to God”.  I found the name Isabella.  It had the right meaning but when I found out that it was a derivative of Elizabeth, well, I knew what our daughter’s name would be.  With Rose as her middle name to remember that first sign of God’s promise to me, I knew we had the perfect name for her- Isabella Rose. 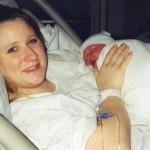 Isabella would end up being my biggest baby and hardest birth (outside of our last birth with Jacob which you can read about here).  She was lacking oxygen when she born and we would soon see problems with her heart as well.  Still, we knew she was perfect and God-given.  She has been the one child to keep us on our toes and many of our best stories begin with “This one time when Bella…” She has endeared herself to many people and often I hear them say, “There’s just something about Bella.”  She brings a smile to everyone’s face and they truly are charmed by her presence.  We know that God has a definite plan to use her for something big.

During May, when we honor our Mother, I am even more thankful because God used Mary to assure me that my child, the child I promised to Him, was going to be ok.  He used Mary, the mother of His Son, to comfort me during some of the hardest times I had ever been through at that point.  He allowed her to come to me, to speak to me, and to bring me peace that only another mother could.  What a tremendous gift He gave me.  I am eternally grateful for the experience He gave to both me and to my beautiful daughter. 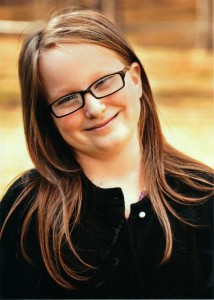