Stand Up for Religious Freedom – OWENSBORO

Defending the Catholic Church from the HHS Mandate 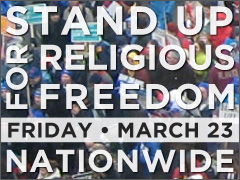 Last Friday night – yes, SEVEN days ago – one of my acquaintances sent an inbox message to me via Facebook. She asked if there would be a Stand Up for Religious Freedom Rally in our town, Owensboro, KY (population 56,000). Since I have a decades-long reputation of being a pro-life ‘fanatic’ and have had similar short-notice brainstorms myself, I suppose I was a logical choice as a recruit for co-captain. I must have been asleep at the wheel because I had not really considered being involved in planning a Rally; I was simply planning to grab a few friends and cross the river into Indiana to attend the rally being held in nearby Evansville.

The Holy Spirit and Rachel, however, had other plans! So with a night to ‘sleep on it’ we agreed to check out our prospects the next day. In the bright sunshine of morning, the ‘PLAN’ emerged and our creative juices really started flowing. Rachel is a young mother of six children and in her thirties. I, on the other hand, am a 50-something Nana who is a stay-at-home ‘mom’ for the second time around – with my grandchildren. Both of us, with children literally at our feet, began the planning process. The national coordinators of the Rally had a tremendous amount of resources available – everything from press releases, fact sheets, signs, poster ideas, and liaison suggestions – so we had a place to go for covering all of our bases. 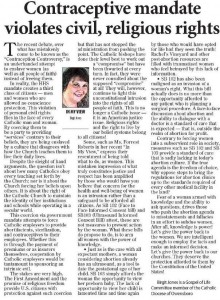 The Holy Spirit had already been working on this without my knowledge anyway. In a horrible op-ed piece in our local newspaper, a female lawyer opined that the terrible, old, white men in our state legislature were forcing women to remain ‘second class citizens’ with their pro-life bills. She even used the term ‘barefoot and pregnant’ – yes, she went there! This had spurred an undeniable urge for a response in me. Since our diocesan Gospel of Life meeting just ‘happened’ to be the next night, I had decided to ask their permission to submit an op-ed response, using their name in my signature. I had some doubts 1) that they would agree to allow me to ‘speak’ for them and 2) that the newspaper would give me the space. To my surprise, I received enthusiastic permission from both!

As this spur of the moment miracle began to take shape, not only was my op-ed piece published the following Monday, the newspaper also published a front page news article about the upcoming Rally – on the same day. The pressure was on! All I can say about the following week is that I’m very happy that I have unlimited texting, mobile minutes, email, and Facebook. Rachel and I burned up the atmosphere with our flurry of communication. By some miracle, we each worked without any face to face contact and 20+ miles apart. We balanced the duties, each using our particular skill set and things fell into place with very little conflict from anyone we contacted and no setbacks. The slate of participants she came up with – on short notice – was phenomenal!

This is it! SHOWTIME!

Morning broke with a 60% chance of rain! As I gathered my cache of handmade posters, umbrellas, and other necessities I shrugged and decided that the Holy Spirit would handle this too. Right on schedule I headed into town and, as the black clouds began to gather, I prayed the Divine Mercy Chaplet. Out loud I said, ‘Jesus, we’re doing this for you! Please hold off the rain, not for us but for your glory’. I made a quick call to my husband, who is in New York for business, and arrived a few minutes early. As our faithful helpers arrived, the clouds parted and the sun began to shine!

Soon the stage was up, balloons were tied, flags were waving and the people began flocking in. The noon siren sounded and it was time to begin. We had a nice variety of participants from various churches, schools and organizations: 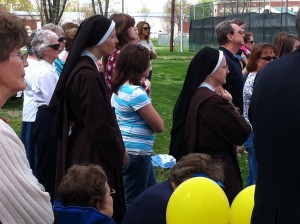 Our rally ended right on time – 1:00 PM and many of the participants stayed for quite some time afterward to discuss the HHS Mandate and where to go from here. Our attendance count was at least 300 citizens, eager to preserve our religious liberty! We were blessed to have  Channel 14 News – a local television station, there as well as iSurfKY – an internet news outlet, and a reporter for the Western KY Catholic – our diocesan newspaper.

I am pleased beyond words and so grateful to have been a part of the Stand Up for Religious Freedom Rally. In total, there were over 150 cities represented! Thank you, Rachel, for thinking of asking me to be your cohort! Thank you, Holy Spirit, for allowing us to do this and for making the puzzle pieces fall into place! All for the glory of God!

These Stand Up for Religious Freedom Rallies were just the beginning. Now that we have helped to inform citizens across the nation, the real work begins. Use your knowledge to continue to fight for our First Amendment rights – if we don’t stand up now, Religious Freedom will be lost forever!

Links to coverage (I will add to this as I find more): 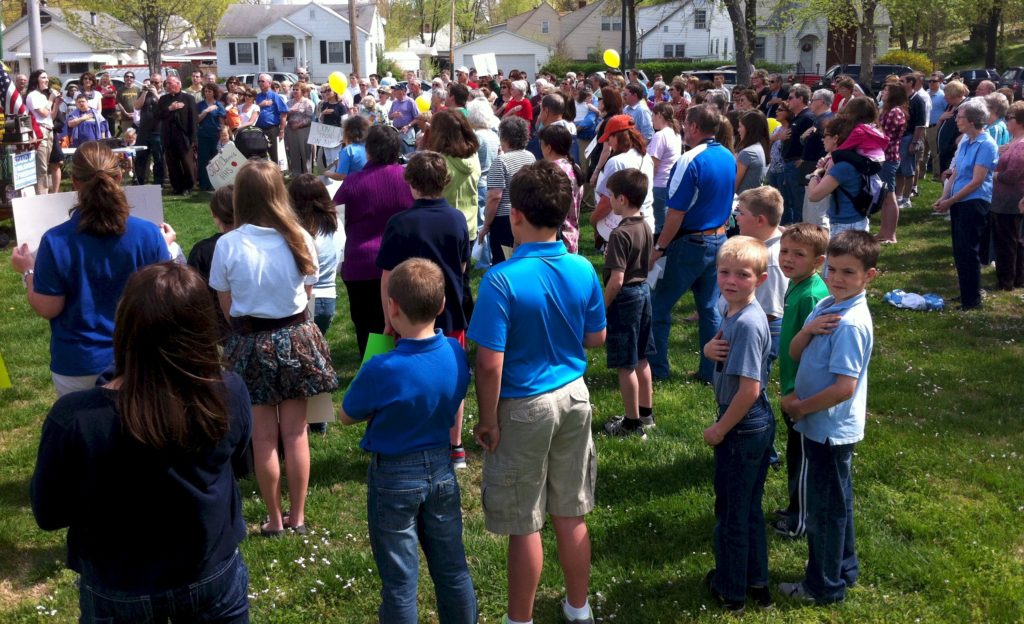 An entire photo album is available here. More will be added as they come in.

« Suffering, Lent, and St. JosephBible 101: Beginning with a Beginner »