RESULTS: 98% Of Non-Mass Going Women Who Identify Themselves As Catholic Contracept – Where Do The Faithful Fall In Line?

If you participated in the poll, thank you! In 17 short hours, we were able to collect 1000 surveys from Catholic women around the US without being picked up by any major news agency.

The point of the poll? The point in all of this was not necessarily to prove the other poll wrong, but rather seek to two things. First, give a voice to Catholic women who attend Mass and do not contracept. Second, we wanted to make people think. The mainstream media paints the Church as being outdated and “behind the times” and challenges the teachings of the Church with no more authority than you are I have. Yet despite the many Catholics who falter in their faith, we can be confident that the Church’s teachings never have–and never will–rely on the holiness of its followers.

Just because the vast majority of Catholics use contraception (often throwing out what I call “the Catholic resume” in advance of their dissent), this doesn’t change what the Church teaches.  The Church is both human and Divine and it’s no surprise that the humans who make up the Church are flawed and imperfect. The Divine part of the Church, however, which is rooted in Christ’s own teachings and protected by the Holy Spirit, is not. We would do well to remember that.

So…like myself, if you are one of several generations who were not taught why the Church teaches what She does about contraception, I challenge you to make today the day that a new chapter begins. Resolve to at the very least understand the teachings. Struggling with a teaching does not make you less Catholic, because most Catholics struggle with some teachings of the Church. Let me say that again: Struggling to understand is not the issue. Defiance is. Deciding that we know better than the Church, which speaks with the voice of Christ, is self-serving and the epitome of moral relativism.

Now, on to the fun stuff!

The survey asked five questions. The answers are shown below. A direct link to the actual survey is below the pictures of the questions for you to view as well. 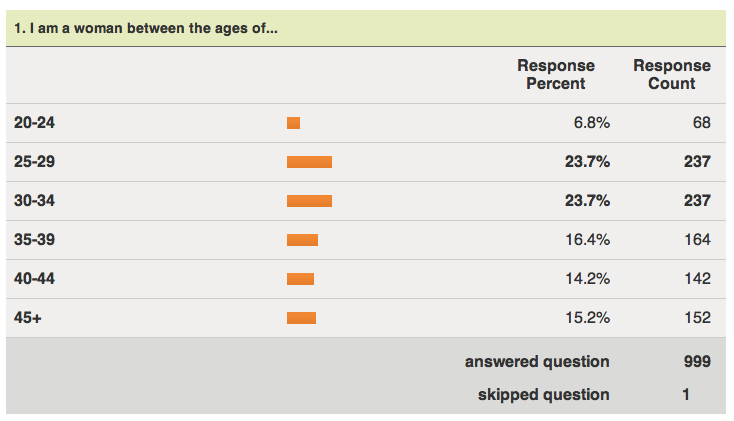 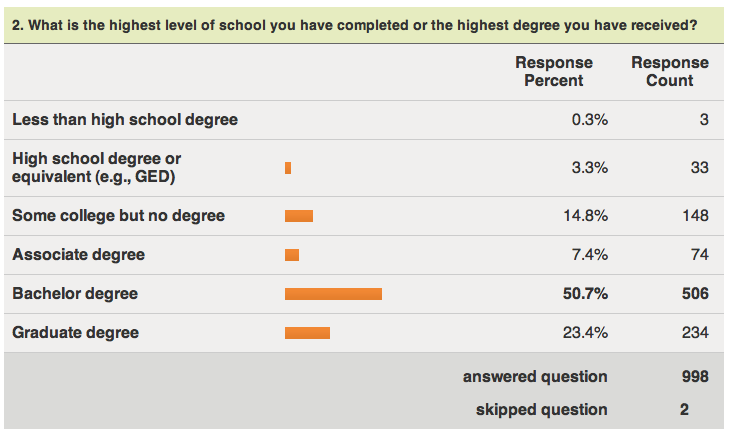 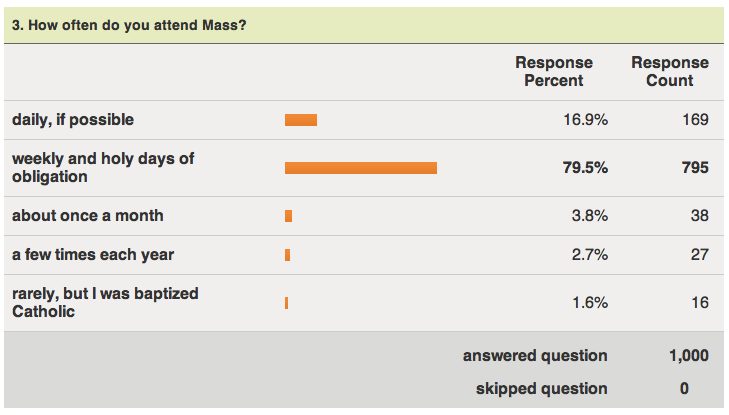 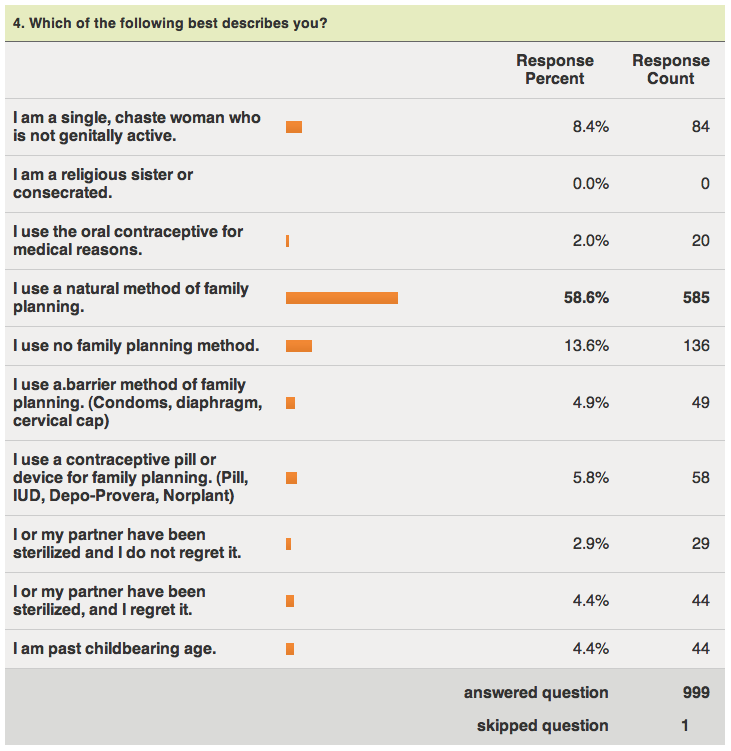 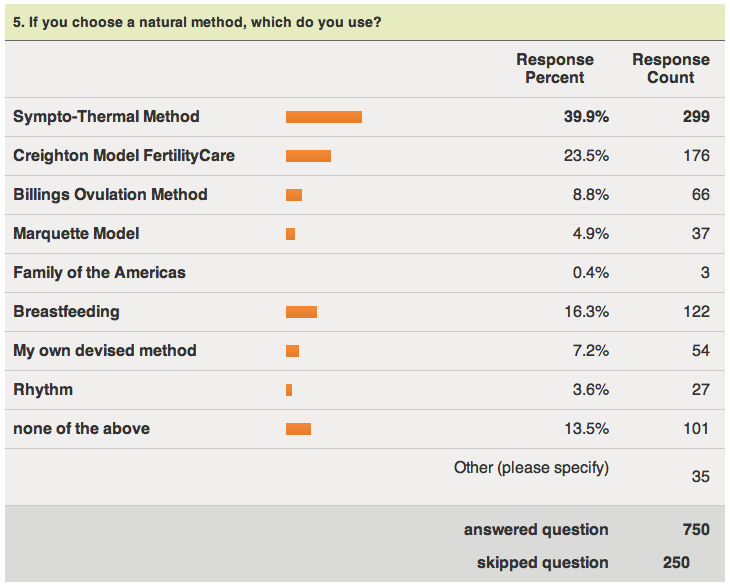 The direct link can be found here.

A friend who conducted the survey had a few words to share about this experience. Read below:

So…98% of Catholics contracept? Really? Wait a minute.  First of all, what defines being Catholic? If a statistic is being circulated through the public sector  as “what Catholics believe and do” it had better accurately represent those who, at the minimum, practice their faith regularly.   So, where do women stand who practice their faith regularly on contraceptive use?

The results of this survey are revealing.  In a population of about 1000 women, fairly evenly distributed across age groups and generations, we found that of these women, 96.4 % of whom AT LEAST attend Mass weekly, only 18% were contracepting.  We found that a large percent of our readers use a “natural method” of family planning.

First, 8.4% of  the Catholic women polled claim that they are single and not genitally active. Don’t tell me these women don’t count in the stats on Catholics. Of the total population 5.8% (N=58) used the pill, IUD, or other hormonal contraceptive, 4.9% (N=49) used a barrier method, and 7.3% (N=73) had been sterilized or had their partner sterilized. Just 2% cited a medical reason for using the Pill. As an interesting addition, of the 73 women who used sterilization as birth control, more than half of them (44) regretted it.  Something to consider.

Many of these women claimed to use one of three modern and highly-researched methods of natural family planning: The sympto-thermal method, Creighton Model FertilityCare System, or the Billings Ovulation Method. The total percent that claimed to use a natural method was 58.6%. Others claimed that they used no method of family planning at all (13.6%).

Some may say natural family planning is a form of contraception. It’s not.  Even many Catholics are not educated in the difference between contraception and “responsible parenthood” as described in the document Humanae Vitae. If you’ve never read the document, it may be a perfect time.  It may even be an interesting topic for a separate future blog post.

I’m a practicing Catholic who loves my country and the freedom I have to be fully and completely Catholic.  In my opinion, the secular stats don’t legitimatize the mandate.  Most definitely, non-practicing Catholics should not be integrated into a “Catholic” poll when freedom of religion is at stake.

I’ve never been one to succumb to peer pressure, but the 98% threw me for a loop. I have no desire to debate it out. Yea, we did the survey on surveymonkey.  It is what it is.  Even if our stats are slanted because our population is more devout, it leads us to reconsider what really matters.  Didn’t Albert Einstein say, “What is right is not always popular and what is popular is not always right.”?

Certainly this poll may encourage some of us that we are not alone.

« Gifts From the MuckGive Us This Day Our Daily Bread »