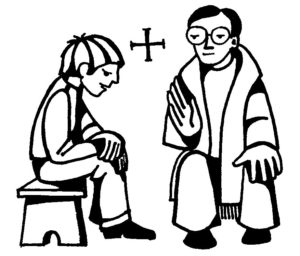 In the hour long confession line recently, I discovered plenty of time to loathe how the bulk of my Examination of Conscience lists the same sins every single time. I remembered back to a Scott Hahn talk discussing Confession in which he shared how he once complained to his confessor about this very same problem, repetitive sins, and the priest asked him if he would prefer new sins? Hahn laughed and realized of all the sins he could have he’d rather keep the ones he struggles with rather than take on different, potentially more insidious sins. Wisely, the priest avoided offering the state of sinlessness as an option. Subsequently, I wondered just how far I could exit the confessional before I committed one of my usual suspect sins, because even the nearest pew afforded me too much time by distance to commit a sin in my mind. In that moment, Confession struck me as ineffective, though theologically I knew that to be untrue. And that’s when I noticed a linking of Confession and Purgatory.

What is the point of Purgatory? It is often described as a place where we are punished for our sins before we are able to go to Heaven, which I don’t find a helpful answer. To the modern mind’s understanding of sin (being a one-time action, occurring in the past) this description is misleading. There is a language barrier where sin is used as a noun and thus the hearer may only understand sin in this statement as events from the past, not recognizing the source of the sin as also sin. So let me stall the answer to the question of Purgatory for a much needed explanation on one’s soul and one’s will. 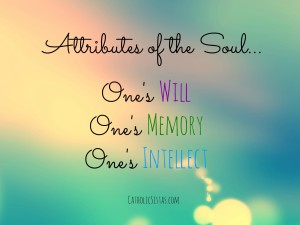 When we go to confession we are forgiven for the sinful actions we have committed, and once confessed and forgiven we never need to dwell upon these sinful actions again. However, because God never, ever interferes with our will (free will), when we step out of that confessional free of the guilt of our actions, our will walks out of that confessional with us, usually with the same inclinations to sin as we walked in with. Thus, we tend to retain the ability to commit those same sins again, and nearly just as easily. And this is why our Examinations of Conscience bear the same list of sins from confession to confession.  However, let us rejoice that with each passing confession, our wills are ever so slightly strengthened, both by the increase of God’s Grace in our soul, and also by the humbling action of going to confession.

Like exercise ever so slowly strengthens our muscles, frequent confession ever so slightly strengthens our will to God’s will. And think, if you exercise as often as you go to Confession, just how strong might you be? On a related note, while in line this last time (I can have a lot of thoughts in an hour, even whilst attending children), I considered how difficult it would be for me to be able to offer a count of my offenses to the priest, like is traditionally suggested. Then I realized how if I went to Confession with greater frequency, say every week, it would be easy to offer a count, and oh how much more I would resist the temptation to sin if I were to keep count!

During this Advent season, as we prepare to honor the first coming of Christ and also prepare ourselves for the second coming of Christ, make your way to the confessional.  Your will and soul may need it just as much as mine.

In my next post I will tie this discussion in with Purgatory.

Upon Jesus’s resurrection and visit to his disciples He said, “Peace be with you. As the Father has sent me, so I send you.” And when he had said this, he breathed on them and said to them, “Receive the holy Spirit. Whose sins you forgive are forgiven them, and whose sins you retain are retained.” Jn 20: 21-23

« Lord Have Mercy: Living Faith, Hope, and Love in the Year of MercyA Guide to Intentional Christmas Giving »