It Is Right and Just: Mass Changes One Year Later

A little over a year ago I wrote a post about change in our every day lives. In that post I discussed how change can be wonderful, difficult, joyful, stressful, and so much more. We can experience all those emotions individually or simultaneously. But in the end, change is often a good thing, even if we don’t recognize it as good at first.

A year later I’m now pleased to report that my boys are now well on their way to being 18 months old, they are doing great, and we are still slowly learning this parenting thing. 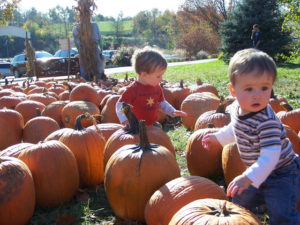 What a difference a year makes!

The “new catalog rules” at work that I mentioned last year are nearing their time of implementation. I was at a conference recently where other librarians were stressing about these upcoming changes and I found myself rather calm about them. I like that feeling.

The construction at my parish is basically complete. Sort of (we are now getting a new organ as well).  Last year I mentioned four big projects that we hoped would be completed in time for the Church’s new year, i.e. Advent. I’m pleased to report that our sanctuary was mostly complete in time for the first Sunday of Advent 2011 and we were able to have Mass back in our sanctuary again. 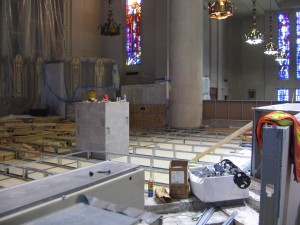 Construction of the new tabernacle and altar

What a great feeling to move into an old space made new and to use the new translation of the Mass for the first time. All at the same time! 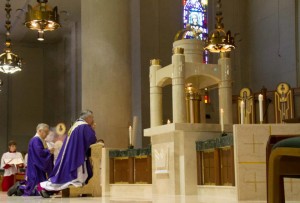 Our Bishop praying before Our Lord in the Tabernacle at the dedication earlier this year.
(c) Cindy Olson, 2012

It was an extraordinary feeling to have so many of  my senses engaged at once. My visuals were different because the altar looked different. I had to listen more carefully and be more fully engaged in the liturgy in order to hear what was different and say the parts that were different. The tabernacle itself wasn’t yet installed, but a few months later when it was we all had to get used to genuflecting where we used to bow.

Over the last year all the various construction projects have been completed (and the new organ is being installed now). We now have a brand new baptistery  a beautiful adoration chapel, a new more roomy rectory for our priests, and a stunning tabernacle for our Lord to reside in. And throughout all these changes to our space, we are also getting used to the changes in the translation of the Mass.

I picked up on parts of the new translation easily and others I struggled with. To this day I still catch myself saying “It is right to give Him …”  instead of “It is right and just.” That one gets me almost every time. I struggle some because my children became more difficult during Mass in this past year. Juggling children and trying to keep them from running off and falling into the baptistery means I can’t always have a cheat sheet in front of me. I still stumble over some words here and there, but those new parts of the Mass that are usually sung have been the easiest for me to pick up on. Music is such a wonderful aid!

How about you? Have you internalized the new translation yet? Has it been easier over the last year than you anticipated it would be? Are you still struggling some? I’d love to hear your experiences!

Kerri Baunach is a Catholic wife and mother of three boys (plus three in heaven). She and her family live in beautiful central Kentucky where she is active in her church, a member of Cursillo, and a Benedictine Oblate. Kerri often writes on her Catholic faith, pregnancy loss, her kids, and pro-life issues. Kerri is a former music librarian (16 years) now stay-at-home mom, was a musician for over 20 years, loves taking her kids to the library (and loves that they love it), is passionately pro-life, can’t cook, and has lived in six states. In additional to writing at Catholic Sistas you can also find Kerri on her own blog at Journal of a Nobody.

« You Are What You EatSurrender to Motherhood »