Finding My Path to Holiness 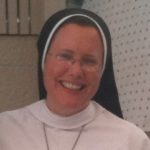 « Taking Your Enemy Off The CrossFrom Agnostic Theist to Seminarian: Part 4 »