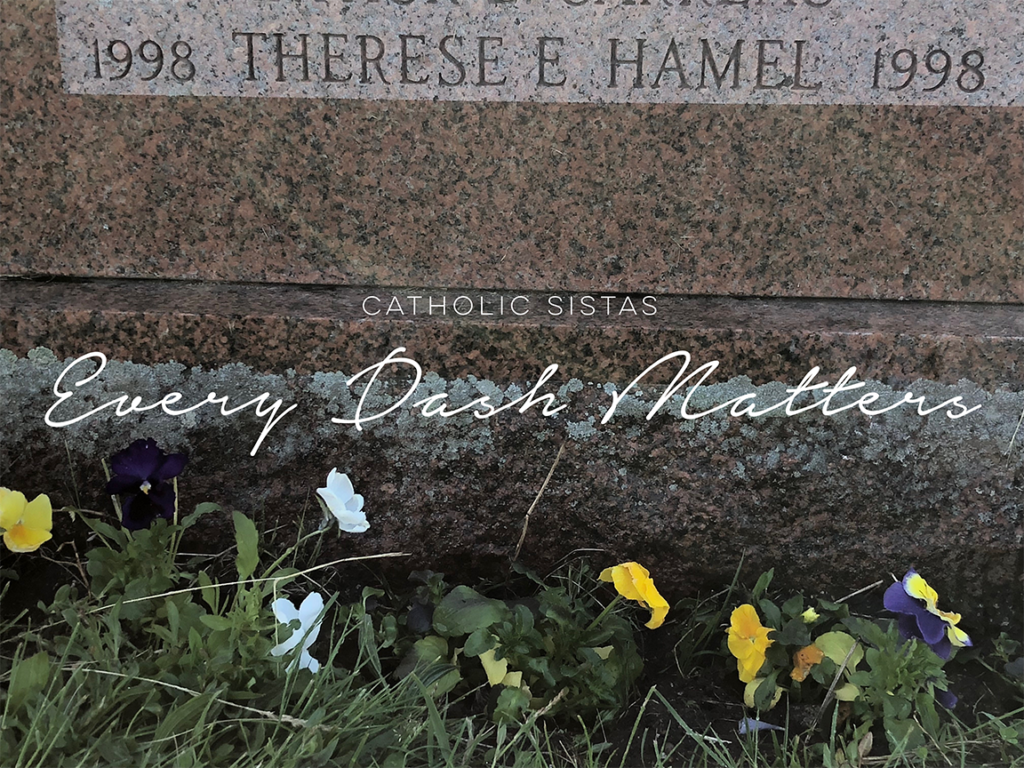 “There will be two dates on your tombstone and all your friends will read them. But all that is going to matter is that little dash in between them.” -Kevin Welsh

What about if there is no dash?

Our fourth child and first baby girl only lived for 16 short days. Therese Elizabeth was born 21 years ago with a genetic disorder that is “incompatible with life”. We soaked in the short time we had with her as best we could….but it wasn’t nearly enough.

I’m writing this on the 21st anniversary of Therese’s birth. It’s amazing to me that 21 years have gone by. It seems like a lifetime ago that I held her in my arms for such a brief time…and, yet, there are moments that will be etched in my head and heart forever that can instantly take me back to those short weeks when she was a part of our world.

Those 16 days were filled with so much emotion. It was a whirlwind of worry, devastation over her diagnosis of Trisomy 18, searching for any shred of hope we could hold onto, and yearning for some kind of normalcy in our lives that had become so out of control…but knowing that the return to “normalcy” would mean that Therese was no longer with us.

And then there was the sleep deprivation…so.much.sleep.deprivation. This baby that I had protected in my womb for 35 weeks was not safe in the world. She could not survive and there was nothing I could do. My husband and I were babies ourselves…only 24 years old…and learning that there were things that doctors just simply couldn’t fix was devastating. I would fall into a restless sleep during those nights Therese was in the hospital.I had horrible nightmares of searching the hospital and not being able to find her. The words “Trisomy 18” would repeat in my head over and over and over again as I slept. My mind was trying to come to grips with this enemy that I could not fight. There was nothing I could do to save my baby…except pray for a miracle. And a miracle was not God’s will for our daughter.

I knew that every day we had with Therese was a miracle. There were SO many grace filled moments during those 16 days. So much love and consolation was given to us by God through the people around us. I felt God in such a special way during that time…He walked with us in our pain and He gave us moments and memories that were the desire of my heart. The moments we had were few…but we had those moments…and for that I was incredibly grateful. Time, however short, was our miracle. And, for one short day, we were able to bring Therese home and our family of three little boys and one baby girl got to be together under the same roof. I will never forget the feeling of eating dinner together that night while I watched Therese sleep on the couch or the gratitude that filled me when Jay placed Therese in the crib we had bought just for her.

Therese died during that first night at home. It was 2:15 am when she took her last breath, but she was in my arms and Jay was right next to me. If she had been in the hospital, we wouldn’t have been there for that moment. God spared me that grief.

Therese was buried in the cemetary with my grandfather who died before I was born. The head stone only had room for her name and the year she was born. That really broke my heart because those dates were so important to me. Sixteen days may seen insignificant, but it was the only lifetime I had with my baby girl. Each day held so much importance because it was all I had.

I wanted people to know she lived 16 days. She was here. Each day mattered because she mattered to me.

This morning, on Therese’s 21st birthday, I was sitting in church spending some quiet time in prayer before Mass began. I couldn’t help but wonder what Therese would have been like if she hadn’t been born with a genetic disorder. I wonder who she would have looked like, what her temperment would have been, and what kind of relationship she would have had with her siblings. While I was lost in thought, my husband, Jay, texted me to let me know that our Goddaughter, Brianna, was in labor with her first baby. So many emotions swelled up inside, and past and present swirled together on so many different levels. It’s a whole bunch of messy feelings that I don’t have the skill to express properly. God weaves lives together in a way that creates connections you never really expect. A date separated by years, between families separated by many miles are all of a sudden drawn in and woven together to become part of the same tapestry. And through it all, these moments are a whisper from God telling us, “I am here. I have not forgotten.” There is truly no coincidence because God has attended to even the smallest details of our lives. We just need to have the eyes to see it.

“…he will wipe away every tear from their eyes, and death shall be no more, neither shall there be mourning nor crying nor pain any more, for the former things have passed away.” And he who sat upon the throne said, “Behold, I make all things new.”

Michelle Hamel is a cradle Catholic who tries to keep up with the chaos of raising eight kids with her high school sweetheart. She spends her days trying to make sure everyone feels loved and squeezing in adoration visits. She blogs about faith and family at Normal Chaos.