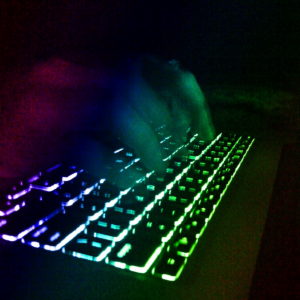 At the prompting of the Holy Spirit, I have reluctantly decided to lay out my online testimony. As the visionary for Catholic Sistas, I have developed an eye and ear for stories, not forgetting how important they are. People can’t argue with your story and say your experience was wrong, even if they disagree with you. The trouble for me to this point is even though I am good at asking others to pray about or encouraging them to share their story, I have not been good at convincing myself to really sit down and share my own story. After all, it needed to make sense in the context of the Faith and the blog. I could say God had not yet revealed that to me. More likely, I wasn’t willing to listen to what He was asking of me, like a petulant brat – LALALA! ::fingers in ears:: I CAN’T HEAR YOU! But the more I see others sharing their story, the more pressing it has become for me to do the same. I now realize it’s time to share mine.

I have a confession to make. As I sit here adding up the years in my head, I realize I have been using online forums for 18 years. EIGHTEEN. YEARS!! That’s half of my entire LIFETIME, folks! It’s crazy to stare at those words, considering the Interwebz as we know it didn’t exist prior to 1995 to the public. This means that not only has this been half of my life, but my ENTIRE time online dates back to the public introduction of the Internet! Yes, I said the same thing twice. It’s because the realization is just.that.startling to me.

When I think about teens being online and their safety, it’s not because I “own” a teen and several more are creeping up on the horizon – it’s because I was the teen on the web. When I think about the impact social media can have on one’s life, escaping to a world that fits inside a tiny screen and can rob you of your real world, I think of my own as the starting point. When I think of how social media has shaped my faith journey, I see how I took an otherwise worldly addiction and conquered it in the name of Christ. My story was featured in 1995 in the old Sunday paper mini mag, Parade Magazine, the most widely read magazine in America. Remember that one? My parents didn’t know what the enemy was necessarily because it was all so new to everyone. They probably saw it as the typical time suck all teens fall into. As a result of that experience, I have become the mean momma. I knew it, I lived it, I camped out in my dorm room and apartment. I succumbed to bouts of addiction and recovery from online interaction…I know the enemy. I come before you as a friend, an advocate, and a sympathizer. 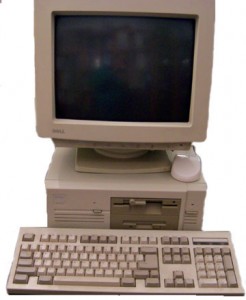 Not the computer I wanted

So, where to begin? I was a freshman at The University of Texas – Austin {insert obligatory HOOK ‘EM!}. Just after Fall finals ended in 1994, my grandfather allocated money to one of my uncles who worked for Michael Dell {cool tidbit – he was one of a few handpicked employees who made deliveries to Michael’s house} so that he could help me pick out a computer for school. Desktop computers that had the tower were all the rage. I wanted that tower because it looked WAY cooler than the other clodhoppers that were quite literally the ENTIRE desktop. Imagine a computer that allowed you to set that other stuff that isn’t the monitor on the floor – how cool is that?? So, I picked the computer I liked best – based solely on looks and functionality a distant second – and a printer to go with. Little did I know it would be the beginning of the rest of my online life.

Thanks to the UT computer lab in the UGL, I was already familiar with computer basics and already had my own UT designated e-mail – how cool was I?? AOL and Netscape were the two big portals to the world wide web at that time. AOL with it’s YOU’VE GOT MAIL!  and the classic nasty AOL dial up sound as you anxiously awaited the phone to slow dial before connecting – talk about delayed gratification! Would it work? Would it drop you like it’s hot? Stay tuned! Better yet, go pop some popcorn because this is going to take a while, amiright Friday night? 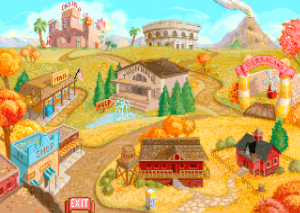 My first taste of online multiplayer gaming was through a network called ImagiNation. I came across it when I returned to my AWESOME look-just-like-a-prison-architect-designed-it-dorm, Jester West. I was hooked. Looking back, and now looking at this picture it seems SO crazy to recall the time I wasted hanging around in this community {click through to listen to the amazing midi file music}. I made a few “friends” and most transferred to phone call friendships – a then modern day freakish pen pal type thing that incurred the nastiest phone bills. I still shudder thinking about that! Interestingly enough {probably only interesting to me}, AOL bought out ImagiNation, and eventually phased it out altogether.

After my time on ImagiNation, I rolled over to AOL, unbeknownst to me about any of the buyout stuff because, quite frankly, I didn’t know or care about that.  I’m so hardcore I even met my husband online – AOL to be exact. He lived in Virginia, I lived in Texas. It used to be a shock story and one that I really didn’t want people to know about so I hid behind how we met. Since we met while I was still in college, I used that line. Meeting people online then was considered to be social taboo. You didn’t want to be one of those people…those losers. People who couldn’t meet people IN PERSON. People SO socially backwards they couldn’t hold a conversation or look you in the eye because they didn’t get out often, or enough. Or at all. It was just better to pretend you didn’t meet people online.

The years would pass after we got married and my need to be online for one thing or another would continue until my oldest was five years old, enrolled in kindergarten and not enrolled in religious education. And that’s when things online got interesting. In my next post, I will talk about how being online transitioned from entertainment and games to the beginning of learning about the Faith.

« The Deacon’s Wife: Part 3: Navigating the Formation ProcessIt’s Not All About Money »