As I mentioned in the debut post of this series, my oldest was five years old, enrolled in kindergarten, and not enrolled in religious education. Not my finest parenting moment, of course, but I use it as a launching point to illustrate that you can know exactly nothing and still have some hope of raising children who are knowledgeable and quite possibly passionate about the Faith. I soon realized it wasn’t about how much I knew – not much – or didn’t know – lots of that; it was about letting go of the pride that goes along with “mom and dad know everything” and committing to learning alongside my children. Humbling? Yes. Worth it? Absolutely.

It was the middle of that kindergarten year when the all too familiar Catholic guilt set in.

Your child should be enrolled in religious education.

You don’t even know what you believe or why – how are you going to teach her what you know?

You knooooooow kids can smell fear and hypocrisy a mile away.

Do you really think “just because,” “it’s tradition,” or “it’s just what we do” will fly when she asks the tough questions?

I brushed the nagging thoughts to the side and went in to our parish office and registered my kindergartener in the parish religious education program. Despite my lack of knowledge, passion, understanding, and even at times desire to know more, I clung to the guilt. It was through the guilt that I was more convicted to do what was right regardless of how I felt. It was like walking down a pitch dark hall.

Where was I going? Where would I end up? 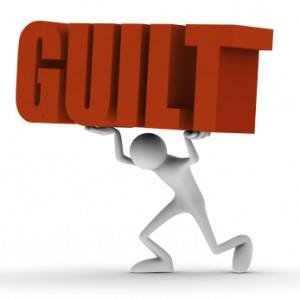 I would later learn from our parish priest that a healthy dose of guilt is our internal gauge for right and wrong – like ripping off a bandaid, you expect to feel pain. It was only when you didn’t feel anything or all-consuming pain that something was off. Many times I would question various things the Church taught only to have Father Fasano give a homily precisely about what it was that I currently struggled…and if I didn’t know the Holy Spirit all that well, I would say He told Father Fasano to hold his gaze in my direction to underscore his point. As in, this homily is for you, MARTINA!

How did this affect my time online, you might be wondering? Well, I started to turn my internet time toward searching for things that were Catholic so I could learn from home. With a kindergartener, an infant, and a husband who worked six days a week, I was not in a place to take classes outside of the home, so I searched for a way for education to come to me. I found some very interesting websites. They laid claim to being Catholic and, taking the site at its word, I started to dig around. Then the true colors emerged. They touted women’s ordination and pushed for acceptance of homosexual unions. I thought to myself ok, I know I don’t know much, but I’m pretty sure this is wrong. As in, the Church does not teach this. And if you had asked me at that point why it was wrong, I wouldn’t have been able to answer with anything other than “just because.” How compelling, right? You would have converted if you heard me say that, right? Still, it intrigued me that some wanted to call themselves Catholic while clearly misleading uneducated people, such as myself, away from Church. I genuinely wondered what the appeal to Catholicism was if they disagreed with the core teachings? With thousands upon thousands of Christian sects for every flavor and set of beliefs to choose from, what could be the reason to be openly dissident? More importantly, it became imperative to me that I find accurate Church teaching. But where? How was I to know what was a legit website and what…well…wasn’t?

I was starting to emerge from my spiritual laziness and apathy. If nothing else, I knew there must be some plausible explanation for any question I had or had heard about. I started my faith journey not rooted in blind faith so much as I felt there must be some logical answer. Logic is rooted in truth, not emotion. I liked that.

I remembered a website I had joined in the fall of 2000 – it was the largest parenting website around and I had signed up for the weekly pregnancy updates, read a couple of articles, but never really investigated the board side of the website. In 2003, I explored the rest of the parenting website and searched specifically for Catholic. I don’t recall how it went down exactly, but I’m sure I must have been grasping for straws at that point. I was pleasantly surprised to find there was a whole community of message boards, including one called Catholic Families! I immediately jumped in and asked eleventy billion questions. I quickly found out that there were others like me who had a similar upbringings. We were all struggling with various Church teachings and yet, there was this desire to put aside our own notions for the sake of learning more. I noticed a lot of the time, answers would come in the form of a response followed by links to various sites that encouraged further reading. So while I was enrolled in what I affectionately referred to the group as “Catholic bootcamp,” I was also visiting external sites such as Catholic Answers, Catholic Online, and the Vatican’s website to name a few. I decided if nothing else, I would make myself a student of the Faith and trudge along, hoping that that feeling of liking it would eventually surface. As I got to know some of the ladies over the years, I noticed a trend among many of the questions from the new users – many had the same questions I had about the Church’s teaching on contraception.

Humanae Vitae – what is that?

There are different KINDS of NFP? Mind blowing!

I don’t HAVE to use NFP? Shut the front door!

There was definitely this feeling of the Church’s teaching on the life issues when it came to conception as being a hidden gem of sorts. I started to share with the group that we needed a grass roots movement to really and truly empower women. That would first start with our taking the Faith seriously, which meant lots of prayer, support from friends, family, and acquaintances, both IRL {in real life} and online, and seeking to nurture each other through it all. For me, that spiritual stretch involved a period of time where I went 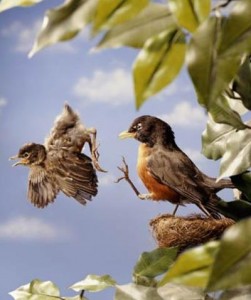 inward for a time, losing my sense of humor and scrutinizing everything because I sincerely believed it was what good Catholics did. A lot of the growth meant trying new spiritual things on and seeing how they fit and then trying something else on, all the while studying, reading, trying out my evangelizing “skills” and conversing with people online. It was now 2008 and my time studying the Faith only online was coming to a close. I was about to get pushed out of the nest. I had gotten a little too comfortable in my online environment “cocoon.”

In my next post, I will talk about how the Holy Spirit placed it on my heart to get comfortable with being uncomfortable. Truth be told, I liked being online. It was safe. It was an introvert’s delight. But it was time for a new challenge. Until next time, friends.