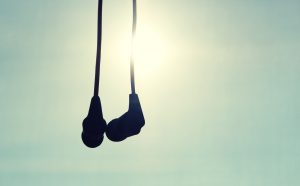 First, you should know that I’m a total 90’s girl and Sam Goody would be proud because I am still an avid CD buyer. Admittedly, many times they end up scratched on the floor of my car and I have to buy new copies- I can’t tell you how many Shania Twain’s Woman in Me albums I’ve bought over the years.

Do you listen to new CDs the same way I do? I usually rush through it, finding the radio hits that made me buy the thing in the first place to play them over and over until I get sick of them and move on to the other songs. I come to know and love the ones that never made it to the radio and then inevitably, there are always a few duds; songs that just don’t speak to me. I skip over these. Eventually I find a groove, a rhythm to the album that makes it mine.

But every so often, something changes. Somewhere along the way one of those duds catches my ear, comes alive, and touches me in a new way. I stop hating it. Stop skipping it. And I start loving it. There’s a beautiful scene that captures this just perfectly in one of my favorite movies, Mr. Holland’s Opus. Watch it…

Like Mr. Holland with John Coltrane, suddenly the album opens up in a new way and the parts I didn’t appreciate at first mean more to me than the songs that made me buy the album in the first place. I absolutely love it when this happens!

So where does the Mass come in, you ask? Well, there’s something else you should know about me…

I am not really a “stand-up-and-greet-the-people-around-you” kind of gal. It always seems a little forced and awkward to me. I’m usually running late to Church anyway and it’s distracting to turn to the people in my pew and shake their God-only-knows-where-they’ve-been hands.

But last week I was at Mass and something changed. I had gotten there in plenty of time, spent time looking over the readings, praying, watching people come in and kneel down. When we got the “greet people around you” cue, for the first time, it didn’t actually bug me. I stood up, smiled, shook hands and tried to remember the names of those who introduced themselves. Something about the practiced changed and, like finally listening to one of those dud songs on a CD, my heart opened up to it.

Later on in the Mass, when the couple in front of me was clearly having trouble finding the readings, I quietly showed them what page we were on. My “peace be with you” felt a little more authentic. And when I entered the pew after receiving Communion and bumped into the guy in front of me, I whispered, “So sorry, Jerry!” and patted his shoulder. 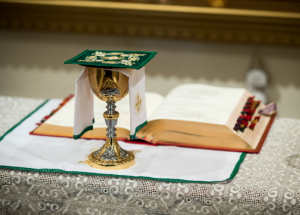 All through Mass, my heart was so open and I felt incredibly relaxed. I wasn’t worried about how holy I was looking or even if my mind wandered a little. I felt connected with my community and, more importantly, was able to completely focus on Jesus in the Blessed Sacrament. I felt like I was at a soul spa, closing my eyes at the readings and letting the words of the hymns wash over me. I found myself smiling all through Mass! I could even appreciate the infant wails from the back of the Church and the little girl behind me who kept pulling my hair accidentally (at least I assume).

At the end of Mass, as he always does, Father asked if anyone was visiting and at the parish for the first time. Jerry and his wife looked at each other and back at me, a little scared. I hadn’t realized they were new, but I laughed and whispered, “Go ahead! Raise your hand! They give you a CD of our choir!” The priest came over to them, gave them a CD and told them he was happy they’d come to the parish that day. My heart was so lifted as we sang the Recessional hymn and I was thanking Jesus for such a warm experience of the Mass, knowing that we shouldn’t have to be prompted to greet the people around us. That is part of coming together as the Body of Christ and it is fortifying.

After genuflecting, Jerry and his wife were waiting in the aisle. “We aren’t Catholic,” they said. “We came here on a whim and were pretty nervous about knowing what to do at a Catholic service. But we have never felt so welcome at a Church. This was wonderful!” My eyes welled up and I told them how glad I was to hear it. They said they couldn’t wait to listen to the CD.

And there it was- that feeling of adventure when a new CD is received! As excited as I was for them to find their favorite tunes on that album, I was even more excited for them to come to love the ones they’d passed over at the start; to grow in intimacy with the songs and make it their own.

And when they told me they would be coming back to the parish, I felt the exact same feeling… excited for them to come to know our Holy Mother Church, but thrilled for them to fall in love with Her; to push through and explore the teachings they won’t understand right away; to open up to the varied charisms in the Body of Christ; and to grow in love for our beautiful faith and our Lord, Jesus Christ.