The Importance of Decluttering Your Soul 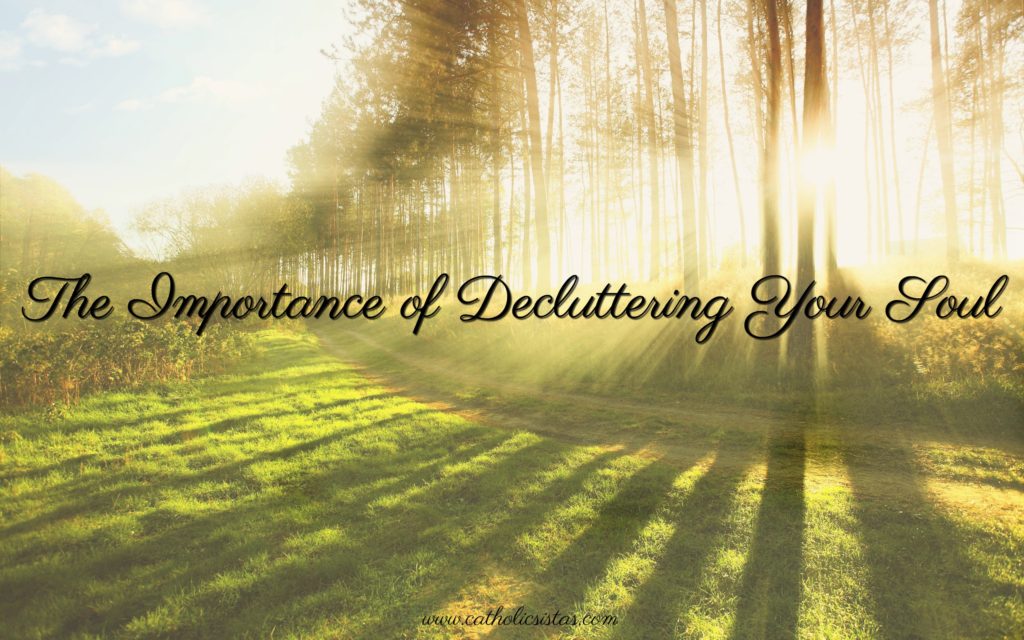 I stood at the doorway of my room, completely overwhelmed just looking at the piles I knew I finally had to deal with. I had been putting it off and letting it build up for far too long – years, in the case of some items, which made the task that much more difficult than if I had dealt with things as they came. The weight of it all was becoming unbearable, though, and so despite the discomfort I gritted my teeth and dove in.

Several hours (and multiple empty boxes and bags of trash and giveaway items) later, I could see the dent I had started to make in the piles. I felt lighter and freer, even though I still had a long way to go. I had made progress! It was possible to see how I could finish this, eventually, or at least make it all more manageable. I didn’t have to be weighed down for the rest of my life, carting around old papers and useless keepsakes and clothes that have long before deserved to be retired.

I really don’t like clutter, but it’s easy for me to let things become cluttered. Once I leave out that pile of mail without putting it where it should go, or once I leave that pair of shoes out on the floor, it’s easier to let the mail start to pile up there, and to take off more shoes and leave them by that first pair, and then add in a jacket and some books, and before I know it things have gotten out of hand.

And I can’t help but realize how much decluttering — getting rid of stuff I’ve known I need to get rid of but am always afraid to because of the finality of it — is quite similar to my spiritual journey sometimes.

I have, by the grace of God, never fallen away from the Church. My closeness to Jesus has varied depending on what’s been going on in my life, but I’ve never had the experience of a long period being away from God entirely. I have, however, had the experience of letting sins and lies from the enemy pile up in my heart, avoiding dealing with them head on, until they get worse and worse. It can be easy to let in that one little lie from the enemy, or to do that one thing little thing I know is wrong but in the moment I decide to do anyway, and it’s easy to figure that I can clean things up with God later. The trouble is that once things start to get dirty…it’s easier to keep letting things get dirtier, whether it’s our house or our souls.

While I’m not quite to the point of appearing on a show about hoarders, I can see how it’s possible to get to there — just like I know how easy it is to put off working on overcoming sins the longer we let them fester. It’s often hardest to make myself go to confession when I need it the most, and it gets even harder if I start to put it off. If we don’t prioritize cleaning the things that really need it WHEN they need it, the easier it is to let more and more pile on, whether we’re talking about clutter or sins. 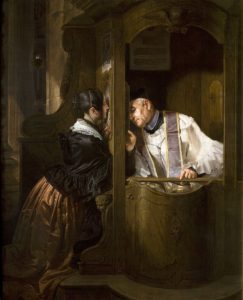 The good news is that it can get easier if we work at maintaining it better. It’s also important to stick with it once we’ve made that decision to start cleaning things up. Even if our resolve is there, it can be easy to get distracted — life happens, other priorities take precedence, and before we know it the mess is right back to where it was when we started. Thankfully, God never tires of giving us second chances — we’re the ones who have to build up to the resolve to start over again (and again, and again).

Just like I have an easier time keeping things clean once I get things clean (or, at least, telling myself I won’t let things again get as bad as they were), it’s similar with sin. Once I’ve gone to confession, I never want to sin again! But, being the human that I am, unfortunately the lack of sin doesn’t last long. At first it might just be a couple of little things — getting annoyed with someone while I’m driving or letting back in those creeping doubts about my own self-worth when I see someone else getting exactly what I want, which must mean she’s better than me.

Sometimes I can get a handle on these things before they pile up or turn into something bigger; but other times I find myself, once again, standing at the doorway, overwhelmed by the amount I have to clean up and clear out, knowing that the only way to be free again is to take that first difficult step, start examining and removing piece by piece, until eventually I reach the end and hear those most wonderful words — “I absolve you from your sins in the name of the Father, and of the Son, and of the Holy Spirit.”