164 cities Stand Up for Religious Freedom

Over 160 cities, nationwide, joined in a concerted effort spearheaded by Eric Scheidler and Pro-Life Action League. The subject of the June 8 Stand Up for Religious Freedom rally was the HHS Mandate, a part of the Affordable Care Act or Obamacare. This legislation infringes on the conscience rights of every American and the promise of the First Amendment which reads in part, “Congress shall make no law respecting an establishment of religion, or prohibiting the free exercise thereof…” With no religious exemption available to Catholic hospitals, universities, or charities, this tainted legislation would force all employers to provide contraception, sterilization, and abortificient drugs to employees as a part of their health insurance benefits. As co-captain of our local rally I am sharing the report I submitted to the national headquarters of the rally:

Building on the momentum of a successful Stand Up for Religious Freedom Rally on March 23rd, the June 8 rally did not disappoint. Featuring our own Bishop William Medley – Diocese of Owensboro, the rally maintained an enthusiastic level throughout the hour long program. At the sound of the noon siren, the crowd of at least 400 citizens was spread across the lush lawn at Moreland Park, taking advantage of shade trees to listen to an impressive array of speakers and singers. Both Federal and State level representation was heard sharing their inspiring and informative messages: US Senator Rand Paul, US Congressman Brett Guthrie and KY Senator Joe Bowen each either spoke or sent officials of their administrations. We also heard a moving account from a representative of Silent No More, who explained her reason for publicly sharing her heart-wrenching experiences as a post-abortive woman. Several churches were also represented both in spoken message and in song. The common theme throughout trumpeted a conviction of standing up for Religious Freedom and Unity among all citizens – regardless of race, creed or station in life…this is not just a Catholic issue! 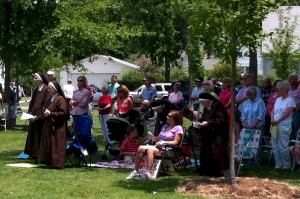 In addition to Bishop Medley, it was wonderful to see several priests wearing their cleric attire and religious sisters in habits, enthusiastically participating. As the program ended at 1:00 p.m. sharp, a large segment of attendees lingered to exchange ideas and plan their call to action. At hand were flyers with contact information for legislators at all levels as well as the HHS Mandate Fact Sheet provided by the national organization spearheading Religious Freedom rallies in over 150 cities throughout the country. We were also blessed to have our costs covered by attendees who volunteered to donate to the cause!

There was also a table offering voter registration which had a steady stream of activity throughout the program. Patriots in the Owensboro area would like thank all of those who participated, attended, and to Pro-Life Action League and Citizens for a Pro-Life Society  for the tremendous amount of information and assistance to rally captains throughout the country. This type of success can only be had by those who are faithful to God, have a strong focus and give freely of their talents. God bless America! 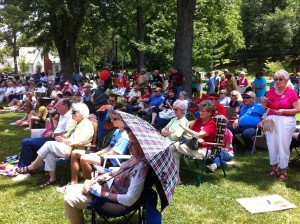 Footnote: We must not rest on our laurels, however, as much work remains to be done in order to preserve the right to the free expression of our religious values in a secular world. Please prayerfully resolve to arm yourself with knowledge, share what you learn, and continue to pray for religious liberty for all people.

Additional materials to help us maintain our momentum in defense of Religious Freedom:

Fortnight for Freedom – a 14-day period of prayer, education and action in support of religious freedom, from June 21-July 4, being sponsored by the USCCB.

Protecting Consciences – a bulletin insert provided by the USCCB. Hopefully we will all see this at our parishes!

Check out the following links for more coverage:

State and Federal Representation in Owensboro, KY – Official Report on Stand Up for Religious Freedom site

« Listen to Your MotherSplendid Sundays : The Solemnity of the Most Holy Body and Blood of Christ »